Latohttps://latonas.com/na’s has analysed Eurostat and United States Census Bureau data to reveal how the revenue of small businesses compare to that of Amazon. 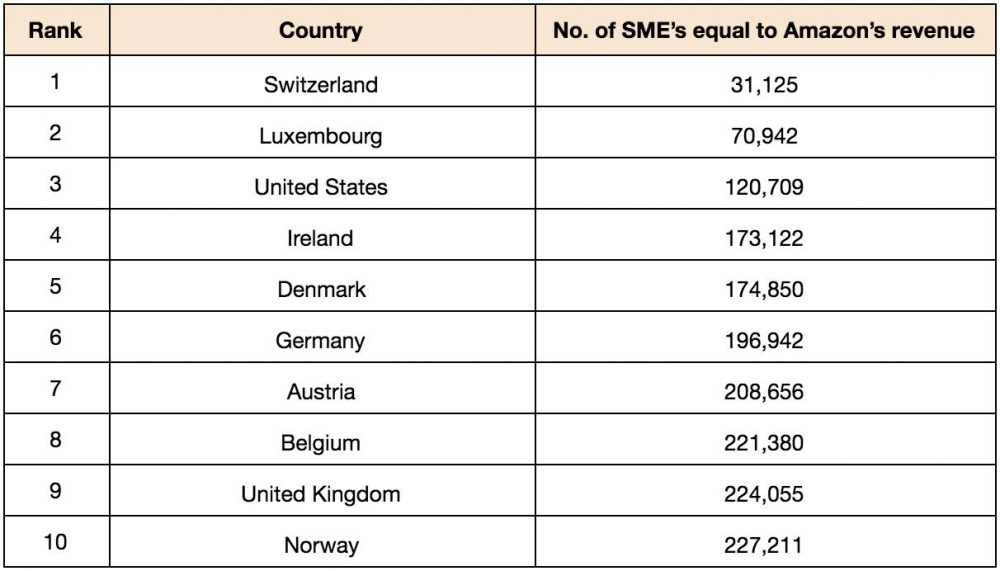 Coming out on top is Switzerland, where the average turnover of a small to medium enterprise (SME) is an impressive $8.53 million. This puts Swiss SMEs far ahead of the competition in terms of revenue, as the second-highest average SME turnover is $3.74 million in Luxembourg. This means that it would take the combined turnover of over 31,000 Swiss SMEs to match Amazon’s, which currently stands at $265,468.

Ireland’s SMEs come in 4th place, surpassing the UK’s by quite a margin, with the UK coming in 9th place. Ireland’s average SME turnover is at $1.53 million while the UK’s is $1.18 million. While this is an impressive achievement for Ireland’s business sector, it still puts them way behind Amazon’s gigantic turnover, which is equivalent to 173,122 Irish SMEs and 224,055 UK SMEs.

The US is inching slightly closer to Amazon’s turnover, with an average SME turnover of $2.20 million putting them in 3rd place in the race to meet Amazon. However, the race is clearly more of a marathon than a sprint as it would still take the combined turnover of 120,709 US SMEs to match Amazon’s turnover.

Coming in sixth place is Germany, home to a number of huge car companies with the likes of Mercedes, BMW and Audi generating a lot of money for the country’s economy. However, Germany’s SME’s still have a long way to go to compare to the tech giant, Amazon. In fact, it would take 196,942 SMEs combined turnover to equal that of Amazon, with the turnover of one SME in Germany averaging at $1.35 million per annum.

Just making it into the top 10 is Norway whose SME’s average annual turnover sits at $1.17 million, over seven times less than that of Switzerland’s SME’s. Amazon’s huge yearly turnover is equal to 227,211 SMEs in Norway.

“Our research shows the huge scale of Amazon’s wealth in comparison to SMEs around the world but it also shows that both in Europe and the US there are millions of small businesses thriving, and expanding.

It’s great to see smaller countries like Belgium and tech-forward Estonia making it in the top 20. It just goes to show that innovation and hard work are the cornerstones of a successful business.”

Average SME turnover for each featured country was gathered using total enterprise revenue and SME share data from Eurostat and the United States Census Bureau. For European countries where SME share figures were unavailable, the EU average was applied. All data correct as of October 2019.

Latona’s is a U.S. Mergers and Acquisitions broker providing services to both investors and entrepreneurs looking to sell and acquire their cash-flow positive businesses. They specialise in businesses that can be run remotely such as established websites, eCommerce, membership, software-as-a-service businesses and domain portfolios, with Latona’s leading the way in providing a match between the investor and entrepreneur.

My Job Became My Addiction