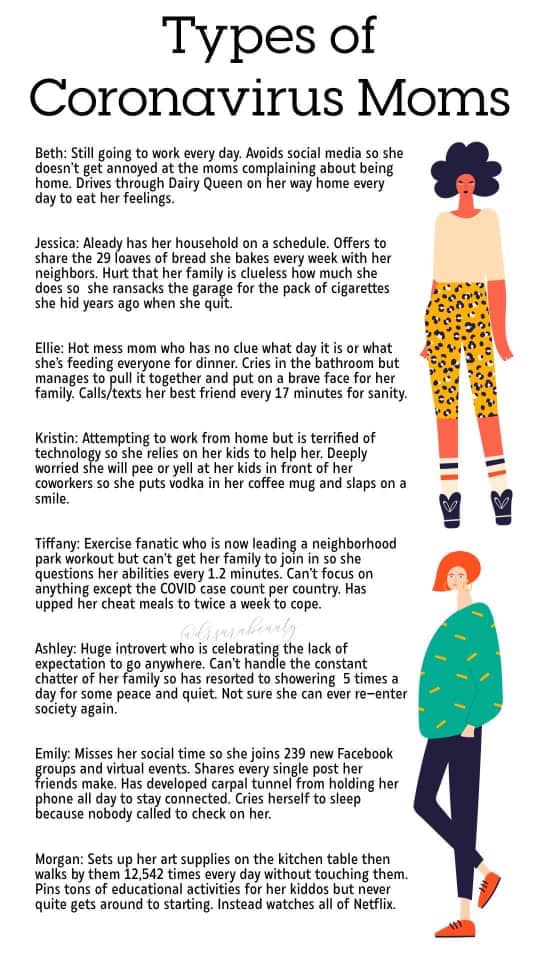 For the reading impaired:

Beth: Still going to work every day. Avoids social media so she doesn’t get annoyed a the moms complaining about being home. Drives through Dairy Queen on her way home every day to eat her feelings.

Jessica: Already has her household on a schedule. Offers to share the 29 loaves of bread she bakes every week with her neighbors. Hurt that her family is clueless how much she does so she ransacks the garage for the pack of cigarettes she hid years ago when she quit.

Ellie: Hot mess mom who has no clue what day it is or what she’s feeding everyone for dinner. Cries in the bathroom but manages to pull it together and put on a brave face for her family. Calls/texts her best friend every 17 minutes for sanity.

Kristin: Attempting to work from home but is terrified of technology so she relies on her kids to help her. Deeply worried she will pee or yell at her kids in front of her coworkers so she puts vodka in her coffee mug and slaps on a smile.

Tiffany: Exercise fanatic who is now leading a neighborhood park workout but can’t get her family to join in so she questions her abilities every 1.2 minutes. Can’t focus on anything except COVID case count per country. Has upped her cheat meals to twice a week to cope.

Ashley: Huge introvert who is celebrating lack of expectation to go anywhere. Can’t handle the constant chatter of her family so has resorted to showering 5 times a day for some peace and quiet. Not sure she ever re-enter society again.

Emily: Misses her social time so she joins 239 new Facebook groups and virtual events. Shares every single post her friends make. has developed carpal tunnel from holding her phone all day to stay connected. cries herself to sleep because nobody claled to check on her.

Morgan: Sets up her art supplies on the kitchen table then walks by them 12,542 times every day without touching them. Pins tons of educaitonal activities for her kiddos, but never quite gets around to starting. Instead watching all of Netflix.

We all have different types of lives. Some people are single during this crisis. Some people are dating and spending the time with their girlfriends or boyfriends, fiancee and fiances, making the best of it, lovey dovey, while married people are just lovey dovey, or about ready to kill each other, realizing that all those ignored red flags are now reality, and after this is all over with, yeah, it’s through. Maybe it has made you realize how fragile and short life is and how it can be taken away from you at any moment, and now you are about to change your entire life perspective. Maybe it has brought you and your family closer together. Maybe it has made you realize just how much you cannot be isolated together. Maybe you’ll go back to being exactly the same as you were and nothing will change.

Read Another Confession:   The Egg

For those single mothers with children, nothing has changed, has it? Still busy as ever? Or are you enjoying a “break”? Single fathers with children, same thing? And how about the co-habitating somewhat-still-loving family that is a family with a father and a mother and children? How are you all doing? Having to take on some of the responsibilities of homeschooling and making sure your child is still being educated during this time. No matter what you are going through, everyone else is going through it too. More than half of the world is or was quarantined. The other half may not even know or think they are or were infected.

For the next few weeks, it is going to get a lot worse then it is going to get better. While China and other countries have come to curb their numbers, the issue is not getting back to business, but waiting long enough, not only so that the healthcare system is not overwhelmed, but so that even you, as a carrier, do not spread anything you may have. We have all been coughing a bit more now that this virus is global. It does not mean that we have the virus, but it could be mixed in with flu season and allergy season makes it hard to tell the difference at times, though seeing what COVID-19 does in the most moderate and extreme cases is enough to know that I want to avoid it at all costs.

I have no children, so I’m not sure what you are going through or have gone through, but I’m sure it is actually nice to have your family around you. I am currently not enrolled in any courses at a university, so most of my time spent during this quarantine so far has actually been just working. I got sent home with homework from my job, a 2-week project of a design I had to come up with for a client. Though the deadline has now been extended, as we are in our third week of quarantine. I also have my night job as well, and my own business to keep running too. Life has just been a “business as usual” for me. I am grateful I did all that I did and that I never had to leave the house during my self-quarantine.

Read Another Confession:   Travelling With Your E-cigarettes [Infographic]

When I did leave the house, I tried to be friendly, isolated, and generous. I bought a cop a few drinks, Gatorade mostly, to keep him hydrated, as he was the one standing at grocery stores, making sure people were not hoarding or going crazy. It is everyone who has to be outside, in the public, who remains exposed and at risk, while I have been very fortunate enough to stay home and work.

For those whose lives were moved entirely online or were already online, there is not much that changed for us. However, if this had been a war or something that knocked out the Internet, you can best believe that Amazon, Google, Facebook, Apple, Microsoft, and all online businesses would have suffered massively, including myself. However, this type of “war” was biological, one the Earth had created to let us know that as humans, the Earth is not ours. We belong to the Earth as long as we live on it.

Instead of talking about stocks and doing things that mattered for our future, like continuing education, we would have been truly talking about survival: not money, not so much as the jobs or careers we might take, but rather, our survival: food, friends, family. The future of our society. The things that actually matter. The Earth is the most important thing we have. We tend to forget we’re just floating on a space rock that happened to rotate just enough in space, far enough from the sun to not burn up, and far enough, not to freeze. And here you are, worried about your everyday lives, as if it is always going to be there. The Israelis might be the most used to this concept: they live as if each day is their last.

As you sit with your families, realize that you caused this. Not you personally. But the human race is responsible for everything that happens to this Earth, this planet. Consume. Consume. Consume. Take enough without giving back and you have nothing left. Feel free to follow my Human Greed series for more information. This planet that you are leaving and have left for your children. If your great grandchildren don’t get to enjoy it, because of your and your government’s actions, then does it really matter what you do right now? Of course, it should. You might not get to meet your great grandchildren, though a few family lineages do get lucky in that aspect.

Hopefully you do take this as a warning from Earth: stop killing everything. Stop thinking it’s all about you. Start thinking about your future, as a human race. While you need money to live, as the system was designed, you do not need to be greedy. You do not need everything. You need enough to live and survive in order to live a decent life. Allow other people to do that too. You don’t have to pay someone’s entire way, but assisting them get to a better place will do the planet good. This is not an article promoting socialism or communism. We are all human. This is the human experience. Someday… it will be over for everyone.

Read Another Confession:   Are you Passionate about Work? [Infographic]

For further reading and pondering:

Not to turn this post political, but during an election year, during a time where Donald Trump reigns and Nancy Pelosi makes sure his ego remains in check, while he makes sure hers is in check as well. It is literally like watching a soap opera in government. It’s like watching a toxic workplace from the outside, secretly loving every minute of it, despite hating that time when you worked at that toxic place. Oh wait, you still do? We have all been but way too entertaining for the aliens that watch our society closely. And that drama isn’t going to stop because if not more than now, as we are stuck inside of our homes, nothing makes you realize just how corrupt our whole government system is, was, and has been, long before Donald Trump ever took to office. Our government is supposed to protect us.

We can blame the leader as much as we can blame all the people who have been running our government and are technically responsible for allowing this mess to happen. We could blame China for this too though China technically showed us how to handle the situation to bring it to a halt. With almost two billion lives at stake, China managed to have under 100,000 cases (officially reported). These measures were already supposed to be in place by our governments, who had seen and known and were warned many times. Yet, none were prepared. And you and your families, and your futures are all affected.

This could be a great thing, a great exercise for when we have an even greater crisis than this, the day, when we learn the truth about everything, especially the day when we can comprehend the idea that we are actually not alone in the cosmos. I cannot say this is a bad thing, though I would be ignoring the tens of thousands of deaths that have occurred. It is a good thing for the Earth, which continues to warn us, but bad if we continue our behavior towards our Earth without changing it, then we are doomed. This was a wakeup call to all humans on Earth.