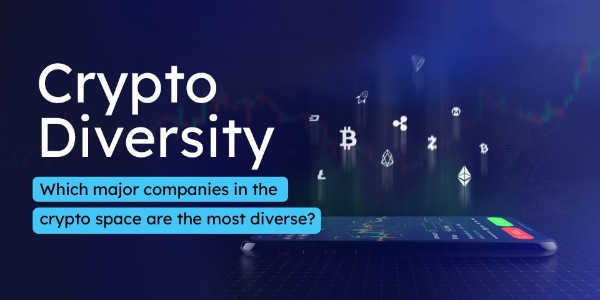 New research can today reveal the gender divide in the world’s top crypto companies – with the average proportion of female senior staff standing at just 21.6%.
The study from Forex Suggest analysed the CEOs, board members and executives of the world’s biggest crypto companies to discover which ones are the most and least diverse.
The 5 most equally gender split crypto companies:
Forte Labs is the only company in the top 30 list with more females than males working at the highest level. There are five females in the top team at Forte Labs (including co-founder Lauren Valdez), compared to just four males.
2. Chainalysis, 46.2% of the top employees are female:
Blockchain data platform Chainalysis has the second-highest proportion of females in its top team, as six of the thirteen-member leadership team are female, this equates to just over 46%.
3. Blockdaemon, 44.4% of the top employees are female:
Blockdaemon is another company that works with blockchains, and they have just over 44% of their leadership team made up of females. There are nine total members of the leadership team, and four of them are female.
The gender split of the largest crypto companies:
Binance, the biggest of the crypto companies studied, has a gender split of 30% female to 70% male employees. The second largest crypto company, FTX has just 16.7% female senior staff members, ranking 19th overall.
Further findings:
You can find the full study here.
Worldwide Crypto Readiness Report
ONET Insights: Potters, Manufacturing