Christmas Food Waste [Infographic]
Are You Seeking To Ace Your Second Interview? 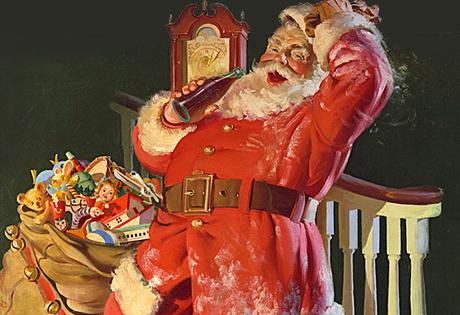 Did you know that the paintings used in the mid 1900-s helped create the modern image of Santa Claus?

This portly white man in a red suit that brings joy to families and friends was firstly portrayed by Haddon Sundblom, a Sweden artist, in 1931. It’s interesting to know that we still use the Sundblom’s illustrations of Santa at Christmas time.

The infographic below takes a look at the most impressive Coca-Cola Christmas ads that signify about the beginning of the Christmas season.

So, let’s take a more detailed look at this enduring image of a merry, jolly, old man in the Sundblom’s paintings from 1931 that was the basis for the next Coca-Cola Christmas adverts.

The Evolution of Christmas Ads from Coca-Cola

1930: artist Fred Mizen painted a department store Santa in a crowd drinking a bottle of Coke.

1931: Coca Cola did invent the red-and-white jolly Santa during the 1930s, the illustration was made by Haddon Sundblom.

Read Another Confession:   Confessions Of A Single Parent

1935: Sundblom’s Santa Claus appeared in Coca Cola ads to remind people that they could drink Coke all year round (not just on summery afternoons!)

1936: the image appeared during the Great Depression in the US, where everyone needed a reminder of happier times. Sundblom painted the image of Santa using a live model – his friend Lou Prentiss, a retired salesman.

1937: Santa’s gloves are tucked into his belt while he stops to take a Coke and a turkey leg out of the fidge. Ads that showed people leaving Cokes out for Santa on Christmas Eve inspired lots of families to do the same.

1938: the ‘Pause that Refreshes’ was one of the longest-lasting slogans in Coke history, first introduced in 1929.

1941: Santa reclines next to a cooler, drinking Coca-Cola Contour Bottle with a sack full of toys.

1949: In the 40s Coca-Cola introduced “Sprite Boy”, a character who appeared with Santa Claus in the Coca-Cola advertising throughout the 1940s and 1950s. Sprite Boy, who was also created by Sundblom, got his name due to the fact that he was a sprit, or an elf.

1953: the original oil paintings Sundblom created were adopted for Coca-Cola advertising in magazines and on store displays, billboards, posters, calendars, and plush dolls. Many of those items today are pouplar collectibles.

1954: for many of us, the sight of Coca-Cola’s iconic Christmas advert signifies the start of the Christmas season.

1955: throughout the years, the slogans used in advertising for Coca-Cola have reflected not only the brand, but the times. Slogans provide a simple, directy way to communicate about Coca-Cola.

Read Another Confession:   Top Reasons Why Job Seekers Should Job Hunt in December

1956: Although it may not seem like it now, this Santa hasn’t always been around. Before Santa, pretty young women were used to endorse Coca-Cola.

1957: People loved the Coca-cola Santa images and paid such close attention to them that when anything changed, they sent letters to the Coca-Cola Company. One year, Santa’s large belt was backwards. Another year, Santa Claus appeared without a wedding ring, causing fans to write asking what happened to Mrs. Claus.

1959: From 1931 to 1964, Coca-Cola advertising showed Santa delivering toys and playing with them, pausing to read a letter, and enjoy a Coke, visiting with the children who stayed up to greet him, and riding the raiding the refrigerators of homes.

1961: Santa tries to hush the family dog who is alerting the owners to a big, red intruder.

1962-1963: Sundblom’s versions of Santa Claus are some of the most prized pieces in the art collection in the company’s archives department and have been on exhibit around the world.

1964: The dog in Sundblom’s 1964 Santa Claus painting was actually a stray poodle belonging to the neighborhood florist. But Sundblom wanted the dog to stand out in the holiday scene, so he painted the nanimal fur black.

1993: The Coca-Cola Company made a dramatic shift in its advertising by introducing the “Always Coca-Cola” campaign. There have been many polar bear ads since the 1993 debut.

1995: The Coca-Cola Christmas trucks are created by agency WJ Doner fo a new seasonal advertising campaign. Known as ‘Christmas Caravans’, the illuminated lorries are made more enchanting with special effects by the world-famous Industrial Light and Magic, the company behind the Star Wars films.

Read Another Confession:   Changes in The Aging Body [Infographic]

2001: The artwork from Sundblom’s 1963 painting was the basis for an animated TV commercial starring the Coca-Cola Santa. This enduring image of a merry, kind, old man with rosy cheeks and twinkling eyes is exatly how the world loves to see Santa.

Christmas Food Waste [Infographic]
Are You Seeking To Ace Your Second Interview?