Why You Should Do Aerobics
Better Investing: Alternative Investments

If you belong to a social media network, it is most likely that you have shared some content that you read recently or came across in the past year. You have shared this content either through your desktop or laptop computer, an iPad, an iPhone, an Android, or some other type of mobile device.

Sharing media content is the new way to be social and it is done throughout the world. Social media spreads faster around the world and is more likely to go viral than most news media reports and press releases. It is so fast that it gets around the world before Google even has a chance to index it. Whether it is the death of a celebrity, a funny YouTube video, an amazing story about a child or parent overcoming some difficult situation, or human beings just being amazing human beings in general, or maybe a dress that clearly looks white and gold, yet somehow manages to be blue and black. By the way, so is this cat.

We, as humans, desire to be social. While we do not know each other personally, through comments and social media networks, we connect through sharing and bonding through our humor and our emotional situations. We connect by reading comments and having others read our comments. Sometimes our desire to share is so strong that we must comment our thoughts and feelings on an article or video, and while we may not know the thousands of others who have previously commented or will comment, there is something amazing about having this communication with a thousand other people who you would otherwise never even seen or known about.

Social Media Sharing has allowed us to connect with our favorite celebrities, politicians, our family from across the United States, and even the President of the United States. The sharing of social media content is only increasing each year, and is not just limited to America sharing content, but the entire world, where Internet connectivity is possible, and social media networks are now offered in almost every single language spoken on the planet.

Speaking of social media and brilliant minds, here is something you don’t usually see everyday, an exchange between Mark Zuckerberg and Steven Hawking: 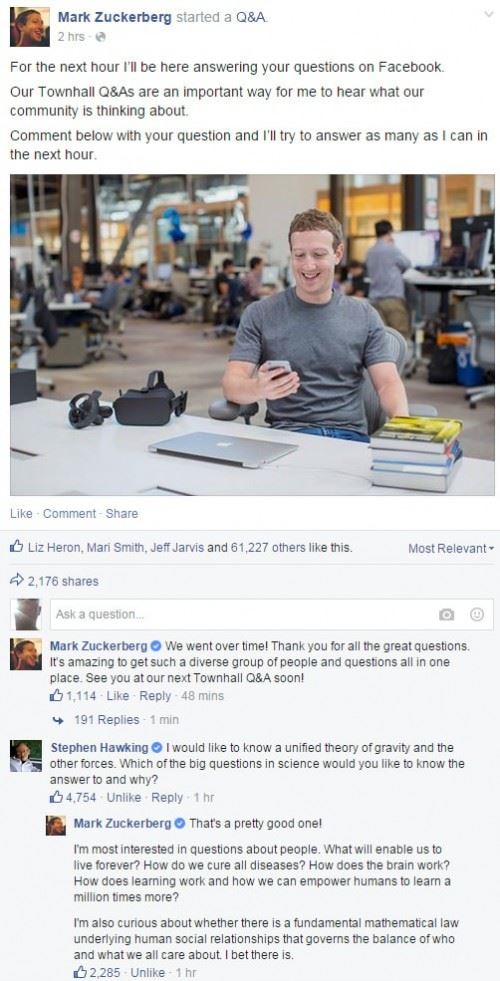 This infographic by AddThis, a social media web-tracking technology company that is used as social bookmarking service and integrated into many different websites, has collected tons of data (2014) on Social Media Around The World.

Social Media Around The World

Our 14 million-site global network gives us a look into how different events change the world through social every single day.

Social media was not only a way to disseminate information; it was used to organize communities under common causes.

PINTEREST SHARING GREW 24% ON MOBILE
Strongest growth across all devices was in Czech Republic and Finland.

TWITTER SHARING DECLINED 7% ON DESKTOP
Despite the decline, Twitter grew in Sudan and Nigeria across all devices.

GROWTH IN VIETNAM
The surge in Vietnam was primarily due to the rise of the popular social network Ketnooi.

DECLINE IN EGYPT
Decline of social usage in Egypt may parallel the recent stability in the country.

GEORGIA GROWS IN BOTH
IT was the only country in the top five lists for most growth in iOS & Android.

MOBILE VS DESKTOP
Desktop went down 1% while mobile grew 46%.

FACEBOOK LEADS THE DISCUSSION
Most of the conversations about Michael Brown and Eric Garner happened on Facebook.

Whether it was mourning the loss of an entertainment hero or fueling a political protest, social media was empowered while empowering the people.

Why You Should Do Aerobics
Better Investing: Alternative Investments