Keeping It Green: 5 Business Giants Committed To Helping The Environment
Career in Photography In the picture above, Michelle Obama must have learned a great lesson: Being the First Lady means making sure the President behaves himself, a job even Secret Services can’t always handle.

The picture below was taken at Nelson Mandela’s funeral in which Barack Obama is seen messing around and chatting when he should be quietly sitting in silence honoring Mandela and paying his respects.  Unfortunately, looking over her shoulder, his wife, Michelle Obama sees him next to Danish Prime Minister, Helle Thorning-Schmidt. Later Obama takes a “selfie” picture with her and the British Prime Minister, David Cameron.  She doesn’t look too happy and quickly stops his behavior.

Read Another Confession:   Quick Ways to Make Sure You Are Prepared for This Summer

While men definitely need women to keep them in line, this made headlines around the world and certainly doesn’t make Obama look very good.  It shows arrogance and ignorance at a funeral.  It is certainly not normal behavior at a funeral and the United States should feel a little embarrassed about the way the President acted, though what is done is done.  It does not mean he should be impeached or penalized for it, but he should know that the American people are not happy with what he did. In the end, we must forgive the President, because he is only human. People are only human, including world leaders. 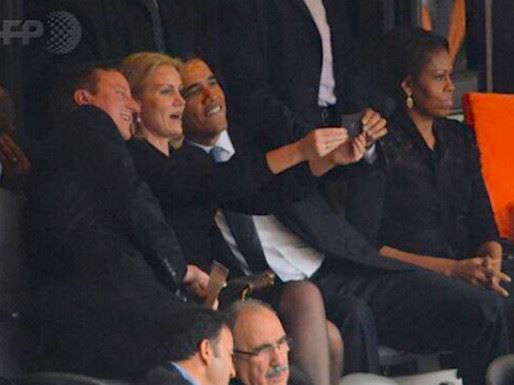 A message to all men everywhere:  Do not behave like this at a funeral.  Do not behave like this in public.  You are allowed to take pictures of yourself, but make sure the event and the moment allows for it. You may not use the excuse, “But the President…” There is no excuse for any immature behavior in public, especially if you’re married.  You may continue to pass gas in the comfort of your home as she can never really take that away from you. The bathroom can be yours for an hour if you please! But in public, don’t disappoint your wife.  She’s watching every move you make from now on.  Michelle Obama’s guard was down for a little while that day, but your wife has already learned from Michelle’s lesson:  She is not going to let you out of her sight in public.  President Obama has set new standards for behaving the way he did and now all men will be constantly watched by their wives in public.

Read Another Confession:   Be Someone's Hero

Good luck men!  Continue to impress and please that great woman you married.  Or else.

Keeping It Green: 5 Business Giants Committed To Helping The Environment
Career in Photography