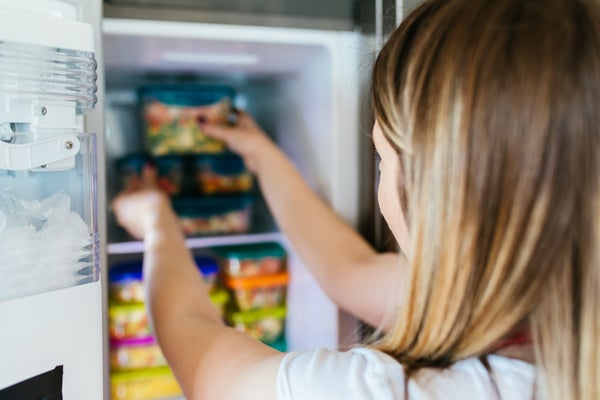 I had a part-time retail job at a Jo-Ann’s Fabrics. I started working there during the middle of October, because I wanted to purchase a nice Christmas gift for my roommate, and needed the extra money.

The reason that I applied for a job at this store, is because I had shopped there for almost a year and got to know the employees, and when you are a customer, you can falsely believe that all is well in that work environment. But, when you actually start working someplace, you find out that the other employees are in fact insane and should be locked away someplace, never to be let out again.

In the back of the store, away from the nice part that only the public sees, is a plain, grey, cinder brick walled area, known as the employees’ room. The floor is naked concrete and the rusty pipes leaked water all of the time. Ants were always present, and liked to walk in a straight line from the back of the refrigerator to a crack in one of the cinder bricks.

This was called the employees’ room, because that is where the lockers were located, as well as the break area, ancient refrigerator, food stained microwave, and coat rack. Because our break times were 15 minutes and lunches were 30 minutes, there was never enough time to leave the store to buy food, you had to bring your own lunch and eat in.

The fridge was so old, it hardly worked and the freezer section was just one large giant chunk of stinky ice. There was a lot of ancient leftovers that no one ever claimed. It was so disgusting, I volunteered to come in on my day off, just to clean it. It was a bio-hazard and since the company was never going to replace it, and no other employee was ever going to clean it out, I decided that if I was going to place my food in that fridge, I would have to clean it.

Well, a week or so after the fridge was sanitized, other employees started bringing their lunches in, placing them in the fridge. A new Silver Spring Mining Company opened up, and to entice us to give them our business, they gave us a huge tray of free wraps and sandwiches, which were also placed in the fridge.

Read Another Confession:   Confessions of a Nursing Home Social Worker

So, even though no one thanked me, after I cleaned the fridge out, it was being used again. In fact, all three shifts of people had so much food in that fridge, people had to start writing their names on their brown bags and plastic containers. All was going well in the break room. Until one dark day…

Early in the morning (we had to come in at 5:00 a.m. during those days when the truck delivered stock), the store manager went to the fridge to get her orange juice, which she just purchased the day before, in anticipation of the early work schedule when inventory was being delivered.

She loved to drink her fresh squeezed orange juice during these early work days. But she would be denied her breakfast beverage on this day… Someone had stolen her orange juice! She went into a rage and vowed to discover the food thief and get revenge. (Did I mention she was a drama queen?)

The rest of us just continued on, unloading the boxes off the truck. Did she help us? Nope. She just went on ranting about the missing fresh orange juice. At the time, we all thought it was pretty funny because she is such a fussy somebody, she hated when anyone touched any of her things and some of the other workers would rearrange her desk, just to wind her up.

A few days went by and we all noticed signs which were posted in the employees’ room, demanding information about the missing juice. Some of us couldn’t help ourselves and we started creating mock up posters, like those of missing children with computer enhanced, age progressions.

One of the posters read something like this: “Have you seen this carton of orange juice? At 10” tall, 40 ounces, was last seen in the fridge. Take a closer look. This is how the orange juice might look today (and there was an older looking carton of the juice.) Underneath the picture was a phone number: If you or someone you know think you have seen this carton of juice, please call 1-800-Lost-Juice and help bring this carton home.”

This store manager went overboard, conducting an investigation, questioning employees, even putting out a suggestion box asking anyone who knows who the juice thief is, to place an anonymous note in the box. If you have ever seen The Office, you will know exactly what I mean when I tell you that she turned into a female Dwight Schrute. Some of the employees stuffed that box with all sorts of anonymous leads. As for myself, I confess to submitting my own note, falsely accusing Orange Bird of coming into the store after hours, and stealing the juice.

Read Another Confession:   Why Getting an Accreditation Can Boost Your Career Opportunities

That is how the Great Case Of The Missing Food and Drinks started, with one stolen carton of orange juice. After that, no one’s lunch was safe. For whatever reason, this single act of taking juice, opened the door for any and all food to be at risk for theft.

In the beginning, it was little things that were taken, some grapes, a small jar of generic peanut butter, a slice of leftover pizza… No one really got excited about these petty food thefts, until the food thief cranked up the volume and started to steal entire lunches. Nothing was safe as long as it was in that fridge. Entire tupperware lunch boxes were missing, a new Hello Kitty vinyl lunch kit had disappeared, three rubber maid containers of lasagna were taken… It was becoming a total slaughter. The Great Case Of The Missing Food and Drinks was on!

The manager was completely out of control, trying to find out who was stealing the lunches. She was so insane, that we could not help but add to the chaos. Some of us started making reports for missing food, that wasn’t really missing, just to make her even crazier than she already was. I know it was wrong, but she was a nasty little woman and made a lot of trouble for the employees, so I too added items to the list of stolen food (even though nothing of mine was ever taken.)

During her last month of employment (yes, sadly she did eventually get fired), she actually called in the police and tried to make a report. They looked at her and treated her like she was missing a few dots off her dice. Of course, they refused to take the report, which is the single event that through her over the edge.

Food still continued to go missing, but she was not reacting. She was quiet. This was not normal for her. We decided that she either totally lost her mind and was experiencing some sort of meltdown, or…. she was thinking — which was never good.

The next week or so, a lot of really nice food was being put in the fridge. These items stuck out from the rest, because no one had their name written on them and they had good stuff in the containers (whipped cream with strawberries, beef and broccoli, etc.) And, like the other foods and plastic containers, these items were also, eventually stolen by the unknown food thief.

About one or two days later, the store’s number one suck up employee (Darlene, who didn’t just have her nose up the manager’s ass, she had her entire head placed in there) showed up to work with a severe rash on her hands and mouth. Her tongue was swollen and she started to lose her ability to speak. Darlene called her husband and he picked her up and drove her to the hospital. The diagnosis: she had consumed food that was tainted with poison ivy.

No one, except the store manager, liked Darlene because she was the biggest suck up, ever. She was a back stabbing sneak who spied on everyone and ran to the manager to tattle. But no one would ever have wished on her what had happened.

The store manager, so determined to find out who the food thief was, planted food in the fridge, knowing that it would probably be stolen. She rubbed poison ivy leaves onto the food, figuring that who ever had swollen, itchy skin, was the food thief. She was so quick to accuse the rest of us of stealing from the fridge, but in a million years she would never have guessed it was her suck up, star employee.

Well, the food thief was discovered to be Darlene, and had to spend 2 days in the hospital recovering from the poison ivy. The store manager was fired for poisoning the food. The rest of us still talk about it when we see each other. I quit right after Darlene was sent to the hospital, thinking that I just can’t work with a bunch of goof balls who rub poison ivy on food.