What’s the Difference Between a Nurse Practitioner and an MD?

Once upon a time — and not so long ago — the difference between a doctor and a nurse was clear. Doctors and nurses each wore their own unique uniforms — a long white coat for the doctor, a white cap and uniform for the nurse. Doctors received far more formal education and training than nurses, who up until very recently, received only two years of training as a rule. In the past, it was possible to assume that while nurses might provide a lot of patient care, doctors wielded the authority.

Now, that’s no longer true. More than ever before, the lines between doctors and nurses have become blurred. Many nurses now hold advanced degrees, and as a result, may be just as educated as their MD counterparts — or maybe even more educated. A nurse practitioner not only has just as much education as a physician, but wields much of the same authority to perform examinations, make diagnoses, and write prescriptions and orders. NPs and MDs perform 90 percent of the same tasks, and depending on specialty, an NP may even earn more money than an MD. But there remain some differences between the two — namely differences in training, and in how NPs are permitted to practice.

Read Another Confession:   5 Reasons to Keep a Storage Unit for Your Business

NPs and MDs Have Different Training

Nurse practitioners and MDs have about the same amount of higher education, but they each approach medicine from different directions. Doctors receive training in the study of diseases and how to treat them, and they leave medical school with an MD. Nurse practitioners, however, receive training in how to relate to and connect with people, and how to heal them when they’re sick.

Training for NPs — and nurses in general — places a lot more emphasis on people skills and bedside manner, because nurses are the caregivers for patients in hospitals and clinical settings. They spend far more time interacting with and soothing sick people than doctors do. In many health care settings, nurse practitioners provide primary care in lieu of doctors. An NP will typically have a Master of Science in Nursing, or maybe even a Doctor of Nursing Practice, and will usually specialize in one of many areas of nursing, like obstetrics or anesthesia. 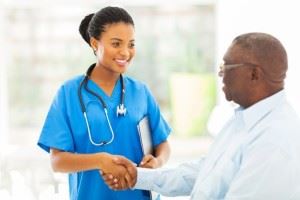 Nurse practitioners and MDs may perform much of the same work, and in many cases, NPs may even earn more than MDs — a nurse anesthetist, for example, earns more than a primary care physician. An NP with a Ph. D. may even have more higher education than an MD.

If you already have an MSN and you go back to school for a Doctor of Nursing Practice, you may well graduate with more higher education than the MDs working alongside you. But there’s still one crucial difference between NPs and MDs, and that’s that MDs can lead practices, while NPs cannot.

Read Another Confession:   Home Is Where Your Health Is: Home Health Aides [Infographic]

There remains a lot of controversy in the medical world about whether or not NPs should be allowed to lead medical teams and medical practices. At least one expert panel has recommended that NPs be allowed to perform all of the same duties as MDs, not just 90 percent — that is, that they should be allowed to admit patients to hospitals and lead practices and medical teams. The panel also recommended that all NPs should be compensated on a level commensurate with MDs, concluding that NPs can provide the same level of care as MDs. When surveyed, a group of nearly 1,000 nurse practitioners and doctors agreed that NPs have enough training to handle all of the same responsibilities as MDs. Furthermore, the surveyed professionals agreed that if NPs were allowed to perform all the same duties as MDs, more patients would have access to care and that care would be delivered more quickly.

Allowing NPs to have more responsibilities could help the nation navigate the shortage of primary care providers it’s currently facing. Health care reform is giving more people access to health insurance, but that’s not going to do much good if there aren’t enough primary care providers to treat those people who are now coming into the health care system, some for the first time. Retiring Baby Boomers will only further stretch the health care system’s already over-taxed resources.

MDs and NPs have different training, but both are qualified to perform many of the same health care duties — so much so that many NPs are their patients’ primary providers. NPs wield much of the same authority as MDs, have as much or more higher education, and may even make more money. If you love working in patient care, a career as an NP may be for you.

Read Another Confession:   8 Hints to Get Your Resume Noticed