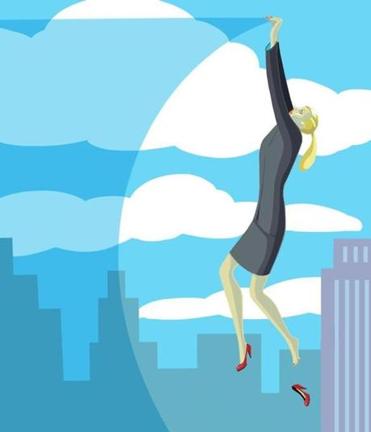 You know about the glass ceiling, but have you heard of the glass cliff? Shattering the glass ceiling is a triumphant action, demonstrating how women can be the equal of male counterparts in every way. Trailblazing generations of women executives have taken on the patriarchal establishment to gain power positions in some of the largest corporations in the world. And while the percentages of female executives and board members are still very small, there has been some growth over the last several years.

However, the larger truth is a painful one. Many women who reach executive levels have yet another tricky paradox to face. The glass cliff is a phenomenon that shows that women are disproportionately hired in high level positions predominantly when companies are in crisis.

A study showed that women executives serve shorter terms than men and tend to be replaced by men. In a study of Fortune 500 companies over the last 15 years, in the 600 or so transitions of women, all but four were replaced by men. In fact, while women had made gains in executive level jobs, the percentage of women in those positions actually went down over the past year or so.

This points to a systemic problem that cannot be ignored. But learning that it exists is the first step in undoing the trap that the cliff creates. See below for an infographic from Fundera to learn more about the glass cliff and how to avoid it.