Minimum Wage vs. Average Annual Income By Profession In The United States

As with most economically-driven arguments, the debate on an appropriate minimum wage has contrasting viewpoints at each end of the spectrum. Taking the employee’s perspective, cost of living is the most glaring factor, and housing cost is the bulk of that spend. According to the National Low Income Housing Coalition, in order to afford a two-bedroom apartment earning minimum wage in Arkansas, our country’s most affordable state, you would need to work 63 hours per week. While that total might seem high, is it unreasonable? Coming from the perspective of a new father who currently works 60 hours a week, I don’t think so. Moving the conversation to my home state of California, where you’d need to work 130 hours per week at minimum wage to afford the same two-bedroom apartment, perspective changes. An increase in minimum wage seems appropriate in this case. But California’s proposed increase to $15, I must say, seems inflated, putting it lightly. Keeping the argument relative is important, and maintaining a correlation between effort and education needed to perform a job function is vital.

While setting a dollar amount as the federal minimum wage is necessary, is the calculation being used to determine that amount optimized for each location? Ideally, the number of hours needed to work to afford that coveted two-bedroom apartment wouldn’t contrast so much state-to-state. Should they be equal? Absolutely not. It makes sense that living in California would require you to work harder than living in Arkansas. But more than twice as many hours per week? That seems a bit off to me. Perhaps our government should adopt a new measure to determine what a fair federal minimum wage is. Putting an emphasis on the cost of living for each state, and perhaps breaking it down by county, to determine what a fair minimum wage is would be the most effective formula. It’s impossible to set a single, fair rate across the country without breaking down the different factors in play. 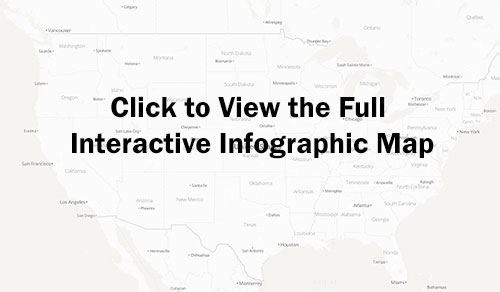 Jason Zimelman is an Public Relations Coordinator for Safer America. This map was created on behalf of the Phoenix Employment Law Firm Robaina and Kresin.