Leadership Characteristics Across the Globe 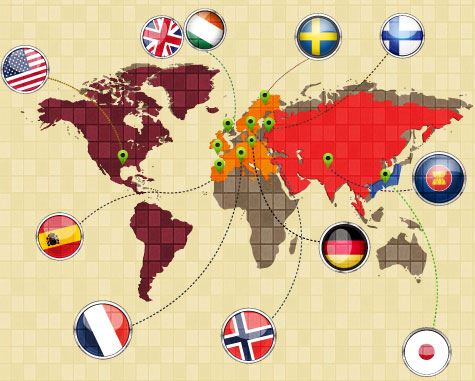 Leadership is an ever-changing concept, and the way in which people practice leadership style varies greatly from culture to culture. From autocratic management to egalitarian practice, from the traditional Asian ‘ringi-sho consensus’ to the Scandinavian ‘Primus Inter Pares’ this infographic explores the overriding philosophies that dictate leadership styles across the globe.

In the UK the most frequently seen leadership style is known as ‘Casual Leadership. Managers are both diplomatic, and willing to compromise while simultaneously are capable of being be strict and merciless when necessary.

The French bring their natural zealous flair to their leadership style, which is characterised as ‘Autocratic Management’. French managers tend to be autocratic and authoritarian, who focus on the big picture, looking at issues facing the company before dealing with issues related to their staff. Similarly the Spaniards are typically autocratic and charismatic, with deriving pride from their own personal influence on their staff members.
Neighbouring Germany’s managers focus strongly on hierarchy but also strive to achieve consensus among employees. German managers believe in a clear chain of command whereby instruction comes from the top, however, the hierarchy is achieved by a general consensus among staff on how to achieve company goals.

Moving to Scandinavia where the Swedes believe in ‘Primus Inter Pares’ from Latin to ‘First among Equals’. Essentially Swedish managers believe that employees who are better informed are more motivated to do their jobs well, and as a result perform better. The Norwegians tend to have a democratic management system. Employees enjoy easy access to their manager, who guides policy and productivity, while also listening to the issues raised. Finnish managers differ from their neighbouring Norwegians in that top management personnel are kept at a further distance from employees, while middle managers make day to day decisions.

Read Another Confession:   The Burden of Brand Recognition

Typically American managers tend to fall on the assertive, almost aggressive side of the scale. They are very confident, and positive and tend to put high regard on the spirit of teamwork and co-operation, while simultaneously focusing on their own individual career objectives.

The East Asian leadership philosophies conform to the Confucian hierarchy of leadership. Confucianism stresses the importance of the wisdom of upper management and experienced staff. Moving further east and Japanese top executives believe in the ‘Ringi-Sho Consensus’. With Ringi-Sho the executive role is more focused on leadership, innovation and the expansion of the company, and the day to day mechanics are handled further down the chain.

LEADERSHIP AROUND THE WORLD

There are many differences in leadership characteristics around the world, from autocratic management to egalitarian, we explore the overriding philosophies that dictate leadership styles in various countries across the globe.

The management style of the UK and Ireland is typically seen as casual leadership. Managers are both diplomatic, helpful, and willing to compromise, while simultaneously are capable of being ruthless when necessary.

Traditional beliefs are central to this management style, however, which can result in a failure to comprehend differing values in others.

Try not to imagine Gordon Gecko when we describe the atypical American leadership style – Managers in the United States of America tend to be assertive, aggressive, and goal oriented. They are very confident, and optimistic, and tend to immerse themselves in the spirit of teamwork. Many American managers value individual freedom highly, and can focus on primarily advancing their own career objectives than those of their teams.

The French are often regarded as a passionate people, and this is reflected in their leadership style. French manager tend to be autocratic and authoritarian, who focus on the big picture, looking at issues facing the company before issues related to their staff. In an ‘Autocratic Management’ model, the opinions of entry level staff and even experienced middle managers tend to be dismissed.

The German leadership style combines two seemingly immiscible elements, a focus on hierarchy and also on achieving consensus. German managers believe in a clear chain of command with instructions and information being passed down from the top. Despite this seemingly hierarchical structure, a strong focus is placed on consensus.

The Spanish leadership model is very similar to the French, except for one crucial element. While both countries managers are typically autocratic and charismatic, the Spaniards tend to believe less in the French insistence on logic, but rather their own intuition. Spanish managers have a tendency to derive pride from their own personal influence on their staff members.

‘Primus Inter Pares’ can be used to describe the Swedish management style, which translates from Latin to ‘First Among Equals’. The Swedish management system, much like their political system, is decentralized and democratic. The central belief in the ‘Primus Inter Pares’ model is that employees who are better informed are more motivated to do their jobs well, and as a result perform better. While this model is conducive to good work, it does however, suffer from the fact that decisions can be delayed.

The Norwegian management method is quite democratic, in that the manager is in the center of the action. Employees enjoy easy access to their manager, who guides policy and productivity, while also listening to the issues raised. Opinions tend to be heard and acted upon in egalitarian fashion, and top executives rarely abandon responsibility and accountability.

Officer Help Out In Crisis

The Finnish management system differs slightly from its Scandinavian counterpart Norway. In Finland, leaders tend to exercise control from a position just outside and above the ring of middle managers, who make day to day decisions. The top executives become decisive when it comes down to the line of decision making, and are not afraid to open up to staff on the bottom rung in order to help out in a time of crisis.

Many East Asian countries tend to conform to the Confucian hierarchy of leadership. Confucianism also stresses the importance of relationships and respect for elders, in the workplace case, upper management, and experienced staff.

Applying the principles of Confucian hierarchy, Japanese top executives tend to have great power, but very little involvement in the everyday affairs of the company. The leadership system, known as the ‘Ringi-Sho Consensus’ ensures that the executive role is more focused on leadership, innovation, and the expansion of the company, rather than on the day to day mechanics.

Richard Madison is the marketing executive for the Brighton School of Business & Management – an online distance learning company specialising in UK accredited Management and Business qualifications. As part of his role Richard writes regularly about innovative practices in the Leadership and Management sector.