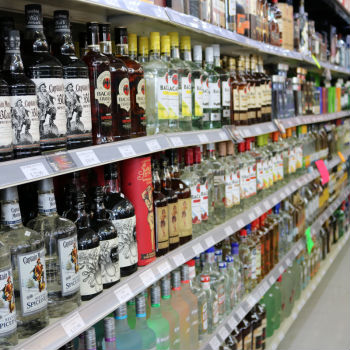 When I was in college in Chicago, I went for a year without work before realizing that I needed money. I asked my roommate, who worked at a liquor store, if he could get me a job where he worked. He was able to get me the job and I started soon thereafter.

I worked as a liquor store clerk. The place was located in downtown Chicago, called Holiday Wine and Spirits. I mainly worked the night shift and I got to see every walk of life in there, including the people I worked with. I have some amazing memories and fun times that certainly were an experience for a college kid. There was not a night that was not fun and not a night that I did not have that wasn’t an experience. We never got robbed at gunpoint, but we did have some people who had stolen credit cards, people with fake money, and even people who got away with a stolen credit card. Much less common was the selling of alcohol to minors.

When I first started, there was a night manager who seemed to be immature for his age, always opening up a bottle of alcohol and drinking it while he was working, or even wanting to do Everclear and orange juice shots all night. I would be wasted while asking customers what they wanted and handling money. I quickly learned how to balance being wasted and still being able to do my job.

After a few months though, the owner approached me about a different topic, the topic of some lottery money missing. He had his suspicions for years, but it turned out the night manager had been stealing and was let go. The night manager was quick to blame me, though I had no intentions of taking money from my roommate’s Uncle, who was kind enough to hire me so those suspicions against me were quickly dismissed.

There was another few workers that came through there who had some great personalities. There was one guy who always had a one-hitter on him, and we would always get high while working, often going into the freezer when we were not busy. The problem with smoking in the freezer was that it had to be done right. You had to blow the smoke outside the door, else the smell would go into the entire ventilation system of the entire building and it would smell like someone was having a party. This happened a few times, and the cops even came in once and asked about the smell. We quickly dismissed it and told them someone came in reeking of the good stuff. They quickly left, and we were happy that we didn’t get caught. After a while, cops in Chicago were pretty cool, as the marijuana laws were lessened in Illinois, and you could smoke weed on the streets, so long as you did not do it deliberately in front of a cop.

Read Another Confession:   How To Minimise Business Shipping Costs

This guy was about 30 years old, very laid back and chill. He wanted to be an actor. He made friends with everyone who came in there. He was a smooth talker and everyone knew him by his name. It was because of him that I was able to taste some of the greatest food in Chicago. Everyone who works in downtown Chicago has to come for their liquor too. When he would find out about the person, where they worked, what they did, he would always make some kind of deal. Whether he paid for their liquor or not, I do not know, but it surely led to tradeoffs and some of the best Prime Rib, Steak, and Chicken in Chicago. If there is a place that I will never need to go again, it is the Cheesecake factory. I think we got a sample of everything on the menu one night.

With another guy I worked with, who had a friend who worked at a pizza place, I got to have a Chicago-style pie with ham, bacon, and sausage on the bottom of the cheese. This was delicious, although it led to some dire diarrheic consequences later on that evening. Long story short: On my way home after work, I rode my bike about 8 miles north on the biker’s path. I had to go so badly. There was no bathroom around. I ended up finding a wooded area, removing all my clothes, and just going. I used whatever was in my bookbag for tissue paper and nearby leaves. That was not a good night, especially when I saw a cop car driving by, and had to hide behind a tree so he did not see me.

Although this remained a secret for the time I worked there, I knew why people liked him and why we got so much great food and that was because he was certainly doing as much as he could to get ahead, and that certainly meant he was likely charging them less or whatever the case may be. He definitely had a good thing going for himself. But he was a nice guy. He was later let go by the owner, who had his suspicions.

Read Another Confession:   What’s Cool About Google Plus [Infographic]

Considering that the liquor store was the only place opened an additional hour beyond everyone elses closing hours, I got to see my share of people that last hour. Even when I worked the morning shift, there would be people lined up outside the door at 7 AM to get their first drink of the day. Mostly homeless, but then I certainly saw doctors, lawyers, professors, and many other professionals who walked in to buy their half pint of vodka, whiskey, or cognac in order to get through their morning. The homeless were the ones who were in there constantly. After a while you would learn their names and even give them nicknames, according to what they drank.

The homeless mostly stuck to drinking beer, Natural Ice “Natty Ice” and Busch for those who had an extra dollar. There was one guy who came in all the time, and earned the nickname of “Mr. Green”, because he drank the green wine, also known as “Mad Dog” or “MD 20 20”. He would come in every hour on the hour and purchase a drink. There were plenty of regulars who were like clock work, often going home, getting drunk off their 6 pack while watching TV, only to wake up again, return a few hours later, and do the same thing all over again. I once mistakenly said to one guy, “Hey it’s you again, you were in here about 3 hours ago!” He got mad, not wanting to admit it. I did not mean to offend him and had kept my mind as to keeping tabs on how many times a person would come in during my shift.

The majority of people who drink always drink the same thing and what you drink says a lot about you. There was definitely a way to tell what products were good and which ones were not, as Holiday Wine and Spirits shelves the crappy stuff on the bottom of the shelf, whereas the good stuff was always on the top. So from the bottom to the top shelf, the quality of drink would be better.

There was a group of Irish exchange students who lived around the corner who were always in the liquor store every night one summer. They drank the worst thing you could drink, Dimitri’s Vodka, which would make anyone puke after a few shots, also on the bottom shelf. My personal favorite vodka is Effen vodka, which I could drink straight, and it goes down like water. This vodka was on the second to the top shelf.

Read Another Confession:   The Challenges and Gifts of Dyslexia [Infographic]

There was definitely a plus to working at the liquor store, and that was learning who the petty thieves of the city were. Some of these thieves do not actually steal anything, but rather, “find” them on buses, in parks, or just on the street on the ground. They need quick cash or a perfect trade in order to feed their habits, especially if they’ve got a taste for alcohol. Than you might just be lucky enough to get a brand new iPod or iPhone for $25 and a pint of vodka.

During my last few months there, it was still only a pleasure to work there and garner up all the stories I could tell. I could probably write several more stories just going into detail some of my nights working there. There were some crazy nights there. There were some nights where celebrities would come in. Some of the Chicago Bulls or Chicago Cubs would come in and easily spend a grand without even worrying about the bill. There was one night, when it was not really busy, and someone came in, and I knew her voice from somewhere! When she walked in and said, “Hey ya’ll”, I knew exactly who it was! It was Queen Latifa! She was looking for Patron Anejo, but unfortunately, we did not have it in stock at the time. Once she realized people were starting to recognize her, she high-tailed out of there and was gone like the wind. That was probably a once-in-a-lifetime opportunity, seeing a celebrity.

The only reason I would ever want to work in a liquor store again is because of the stories. And if I ever took a job in a liquor store again, it would probably be just there. Anything else and I would have to pass. The life of a cashier in a liquor store is not fun. It had its dull moments, especially when you thought to yourself, “I really don’t want to turn out like that guy.” If anything, working as a liquor store clerk only helps you to further establish yourself so you do not get stuck in a dead end job watching other people waste and piss their lives away on alcohol, or worse, become one of them.