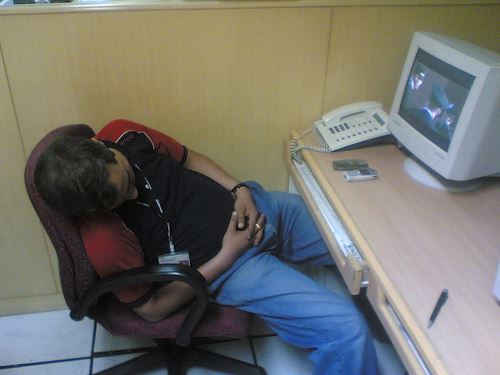 If it is difficult to motivate employees to greater productivity, it is doubly hard to deal with someone whose performance consistently falls below expectations or the norm. This is mainly because you are dealing with a person with individual idiosyncrasies, and what worked with an earlier problem employee may not be effective with him. Still, there are some things worth trying to wake up a deadwood employee.

If an erstwhile good employee suddenly or gradually became bad, there must be underlying and triggering factors for the change. It is not enough to institute any kind of ‘symptomatic relief’ as it will not last long. Dig for the reasons behind reasons until you find the root cause, the resolution of which will have a positive domino effect on your employee’s performance. Often, problems are not caused by a single factor by combinations of many different ones.

Talk with him one-on-one.

Meet somewhere casual, public or private —whichever you think best— but not in your office, which will remind him of the superior-subordinate status. Ask him why the change, since he must be good enough to get hired. Focus on the reasons, not the problems, and make him understand you believe he can do much better. Emphasize that it is to his best interest to improve, but don’t promise heaven if he does.

Read Another Confession:   What You Need To Know Before Investing In Gold? [Infographic]

Before your meeting, write down what you want to discuss with him so as not to forget vital issues nor get distracted by trivialities. Write down as well achievable, time-bound targets you might wish him to achieve to set him back on his feet. Get him to agree to these before you end the meeting, stating likewise the adverse effects if he does not make good.

Praise him on his successes.

Every bit of encouragement will help your underachiever recover his former verve, so it is good to appreciate his efforts privately and publicly when appropriate, but don’t overdo it. Nothing turns off a person faster than insincere and patronizing praise. Also, refrain from generalizations and be specific in what you are praising him for.

In trying to accomplish the agreed goals, your underachiever might meet other obstacles he would not wish to tell you for fear of being considered a crybaby, so it is best to keep abreast of his work and mentor him through the trying times. Coaching him to improve and getting genuinely interested in his personal progress with less emphasis on the desired objectives would be helpful to his endeavors.

If he proves intractable, insubordinate or hopelessly inept, just let him go. It is possible that the root causes of his problematic behavior are insolvable, or his status irrevocably modified. If it can’t be helped anymore after you’ve done all you could for him, then there’s nothing else to do but to fire him if he won’t resign. It is better to lose an employee than sink the company’s boat.

Read Another Confession:   What Does The Qu'ran Say About Women?

Efforts to improve an underachieving employee are not always successful, so don’t expect miracles all the time. The idea is to help them all you can, but in the end success will depend on the employee themself. So if you should fail, let it not be for lack of trying.

This was an article by Phil from Bourton Lean Consulting. Phil spends his days helping to improve a company’s efficiency and profitability and his evenings with his beautiful wife and kids. Phil’s two biggest loves are his family and his car.