Many incredible women are renowned for their achievements, and their memory has been cemented in history. From Cleopatra to Evita and Marie Curie to Eleanor Roosevelt, the world recognised these incredible women, their knowledge and their accomplishments.

While numerous phenomenal female pioneers are household names, there are a range of inspiring women who accomplished incredible achievements and are today often overlooked. This infographic showcases the determination of incredible women who changed the world and are today mostly forgotten.

Among the numerous inspirational ladies illustrated in this infographic are Dr. Elizabeth Blackwell, the first female doctor in the United States. While taking her studies Dr. Blackwell was requested to leave lectures on human reproduction in order to protect her “fragile sensibilities”.

Lillian Bland designed, assembled and flew a plane in 1910-11, being one of the first ladies on the planet to do so. While Sojourner Truth escaped a life of slavery and became a prominent abolitionist. Her stirring address at the Ohio Women’s Rights Convention in 1851 entitled “Ain’t I a Woman?” strengthened support for the abolition of slavery and also women’s rights.

‘The Tale of Genji’ is generally thought to be the first novel in mankind’s history, and was composed by a remarkable woman Murasaki Shikibu. While Shikibu is the best known author from Japan’s Heian period her father applauded her knowledge and wished she hadn’t been ‘born a woman’.

Overcoming incredible hardships while simultaneously fighting gender (and often racial) prejudice these incredible women achieved great success and changed the world. This infographic from the highlights ‘The Most Amazing Female Leaders that History Books Forgot’. 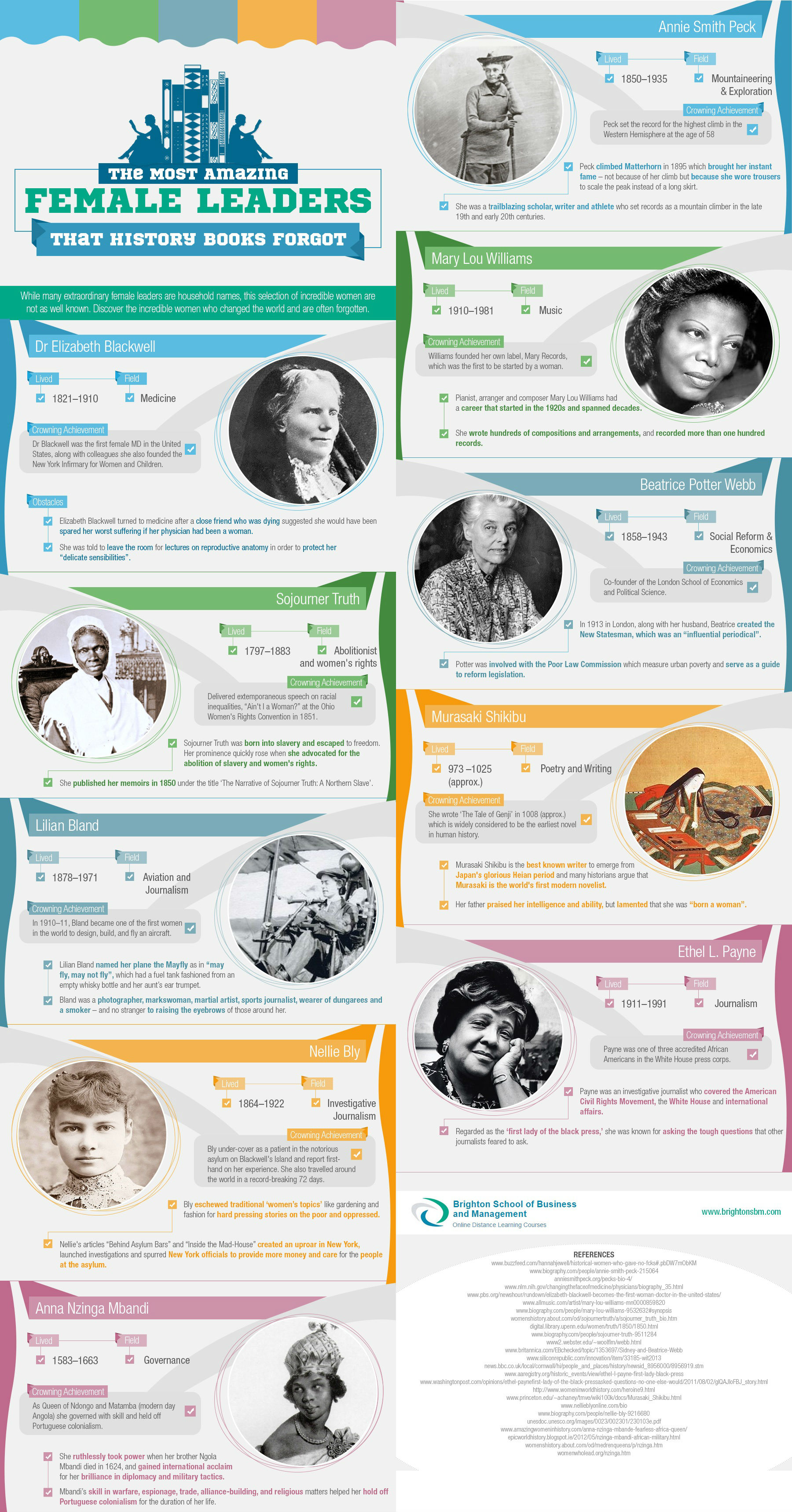 The Most Amazing Female Leaders That History Books Forgot

While many extraordinary female leaders are household names, this selection of incredible women are not as well known. Discover the incredible women who changed the world and are often forgotten.

Crowning Achievement: Dr. Blackwell was the first female MD in the United States, along with colleagues she also founded the New York Infirmary for Women and Children.

Crowning Achievement: Delivered extemporaneous speech on racial inequalities, “Ain’t I a Woman?” at the Ohio Women’s Rights Convention in 1851.

Crowning Achievement: In 1910-11, Bland became one of the first women in the world to design, build, and fly an aircraft.

Read Another Confession:   Mental Health At Work In the UK [Infographic]

Crowning Achievement: Bly went undercover as a patient in the notorious asylum on Blackwell’s Island and reported first-hand on her experience. She also travelled around the world in a record-breaking 72 days.

Crowning Achievement: As Queen of Ndongo and Matamba (modern day Angola) she governed with skill and held off Portuguese colonialism.

Crowning Achievement: Peck set the record for the highest climb in the Western Hemisphere at the age of 58.

Crowning Achievement: Williams found her own label, Mary Records, which was the first to be started by a woman.

Crowning Achievement: Co-founder of the London School of Economics and Political Science.

Crowning Achievement: She wrote ‘The Tale of Genji’ in 1008 (approx.) which is widely considered to be the earliest novel in human history.

Crowning Achievement: Payne was one of three accredited African Americans in the White House press corps.