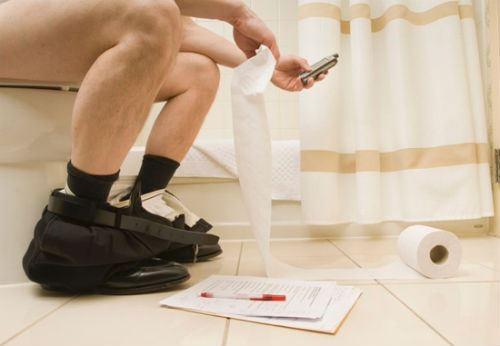 We are all (hopefully) aware that toilet seats get dirty, and that is exactly why we all (again, hopefully) clean them frequently, but there are many items that we use every single day that we never really think to clean. We never consider just how dirty they can get. Take your mobile phone for example. You probably use that more than anything else in your day. Well, did you know that it can have up to 10 times more bacteria on it than a toilet seat? Even your computer keyboard at work can have up to 5 times more!

Plumbworld have put together this informative but frightening infographic, which compiles a list of everyday items that we never really think to clean. But we probably should!

You’re not even safe in your own home. Touching your light switch will find you touching 200 bacteria per square inch, your chopping board is covered in almost 200 times more bacteria than your toilet seat, and… most scary of all… your toothbrush could be contaminated with particles of water from your toilet!

Toilet seats can get dirty, and that is why we all clean them frequently. There are many items that we use every single day that can get even dirtier though, and we never really think to clean them!

When was the last time you cleaned your smartphone? Well studies have found that they can be covered in up to 10 times more bacteria than a toilet seat, including staphylococcus. In fact, approximately 75% of the UK population admit to using their phone while actually on the toilet!

For similar reasons to the smartphone, tablets are also home to a huge amount of bacteria. A study found that they had traces of up to 400 units of staphylococcus per swab, whereas toilet seats had traces of just 20 units. That’s 30 times more for this particular type of bacteria!

Office keyboards get touched all day long, and the small gaps are magnets for food crumbs. A study that tested a huge number of keyboards in a London office found them to be up to 5 times more germ-ridden than a toilet seat. This isn’t an excuse to stop working, unfortunately, just a reason to clean them!

Every time put a load of underwear into the washing machine, you could be transferring 100 million E. coli bacteria. Front loading machines in particular provide an ideal environment for bacteria as water tends to sit at the bottom. These germs can then transfer onto furniture (and supposedly clean) loads.

Bacteria needs three elements to thrive – organic material, warmth and moisture – and a used towels provides all three. Towels pick up dead skin cells, get wet, and sit in warm and moist conditions in the bathroom. This makes them the perfect home for bacteria, so remember to wash them every week.

A study at New York University found that when you flush your toilet, tiny particles of grossly contaminated water can actually splash up to 6 meters away from the toilet! So if your toothbrush is kept in open air by the sink (which most people tend to do) you could be in trouble!

You need to come into contact with taps before you can wash your hands, so it is no surprise that they get so filthy. Studies have found that these faucet handles have up to 21 times more bacteria than a toilet seat. In fact, kitchen taps are even worse still, and have up to 44 times more bacteria!

Researchers in Arizona, USA< tested 1,000 kitchen sponges and cloths – and found that 10% of them has traces of salmonella. The study also found that each square inch of the sponges contained up to 400 times more bacteria than a toilet seat. This is largely down to them hardly ever being replaced!

Each time you flick a light switch on or off, you transfer a lot of bacteria from your finger tips – especially if we’ve unknowingly been touching various germ-ridden surfaces beforehand. Light switches around the home can have over 200 bacteria per square inch, and public light switches can have even more!

You’ve heard the term ‘filthy rich”. Well, this is actually very appropriate, as bank notes can be covered in up to 200,000 bacteria. This is hardly surprising when you think about how many different people have come into contact with it before you. Your credit cards aren’t bacteria-free either!

It’s not just your money that’s covered in bacteria, but cash machines and card machines too. These are never really cleaned, and studies have shown that each button contains 1,200 germs on average. So by the time you have entered your pin number, you have encountered almost 5,000 germs!

Think about how many germ-ridden things you come into contact with in the outside world before stepping into your care and transferring these germs to the steering wheel. Steering wheels can have 5 times more bacteria than a toilet seat, and this is made even worse if we cough or sneeze in the car.

You may want to think twice before picking up a menu and running your finger through all of the delicious options next time you visit your favorite restaurant, as these menu can have up to 100 times more bacteria on them than a toilet seat. The table surfaces get wiped clean, but the menus don’t!

Read Another Confession:   What To Do If You Are Scared To Leave Your Dead-End Job

Trolley handles have been held by hundreds of customers before you on the very day you decide to do your food shopping. When you couple this with the fact that they have sometimes come across raw food and are kept outdoors all night, it isn’t difficult to see why they are more germ-ridden than a toilet seat.

Going up? Bacteria certainly is. Studies in Saudi Arabia found that 97% of the lift buttons tested were contaminated, and research conducted by the University of Toronto found that the lift buttons could be crawling with up to 40 times more bacteria than a toilet seat. Maybe take the stairs next time.

Handbags contain everything from smartphones, to makeup, to bacteria… Research has found that the average handbag is 3 times germier than a toilet seat, and handbags used regularly are up to 10 times germier! The handles were covered in the most bacteria, and lipstick was the second dirtiest.

The carpet is one of the most bacteria-ridden parts of the house – with almost 700 times more bacteria than a toilet seat. In fact, approximately 200,000 bacteria can be found per square inch of the average home carpet – including traces of E. coli, staphylococcus, and salmonella.

Research from the University of Arizona found that the average chopping board was covered in almost 200 times more bacteria than a toilet seat – particularly on chopping boards used for raw meat. The grooves created by knives create perfect little homes for germs to live and thrive.