What Are The Best-Performing Crypto Currencies? [Infographic]
NFT Cities: Which Global Cities Are The Most Popular For NFTs?

Cognitive Biases You Use Everyday That May Be Hurting Your Decisions 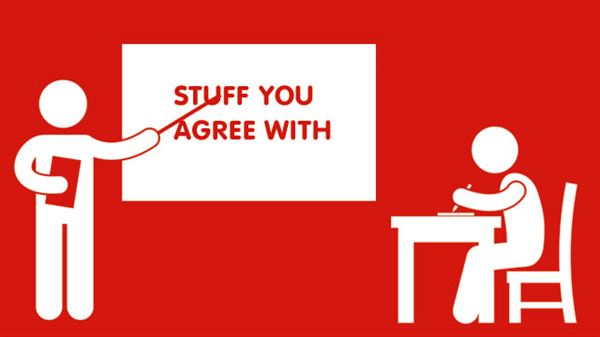 We base our everyday decisions on how we perceive the world and what we need to do in the world. Many of our decisions often come from our past decisions, which we learned from, either making good choices or bad choices. From the bad choices, we often learn not to make them again and from the good choices, we understand that it is okay to make those same decisions again, and rarely do we stray from wanting to make a bad decision.

Our lives are filled with judgements about situations, judgements about people, and judgments toward ourselves. Everything we do can be narrowed down to our own biases and prior actions, which always teach us lessons. A google search might lead you to the exact answer you are looking for: if you want to believe that McDonalds is healthy, than you will probably find that it is, a confirmation bias. Since this confirms your beliefs that McDonalds is healthy, you have fallen to the availability heuristic. You might also choose to believe that the very first thing you come across is absolutely true.

Many fake news articles are popping up all of the time and many people believe those articles to be true. They might even believe that, despite earlier articles that have made solid claims of research confirming that something is true or false, the latest information is the most accurate information, a recency bias. With access to Google, we might forego sleep, and I am certainly guilty of it myself, of seeking useless information, out of boredom, which leads me to fall into the information bias.

Read Another Confession:   Car Servicing: What You Can Do And What To Leave To Professionals

Who you voted in the past election might have been based on your parents’ past decisions, or whether you have always voted Democrat or Republican, or by something a candidate said that you liked. You may have voted based on what you felt was a zero-risk bias: one candidate was completely new to politics, while the other had claimed experience within government. If you voted, you probably felt great about that decision and were confident in making your choice, you experienced the choice-supportive bias. If you made the decision on who to vote for because most of your friends voted a specific way, you experienced the bandwagon effect and groupthink, which is a bias that states that your beliefs about something increased depending on the number of people who hold that belief, so if most of your friends leaned one way, you would likely do so as well.

No matter what we do, we cannot escape biases and especially, there is hardly escaping our own biased decisions and judgments. Everything we do can usually be defined with a bias. These are twenty cognitive biases that screw up our decisions. 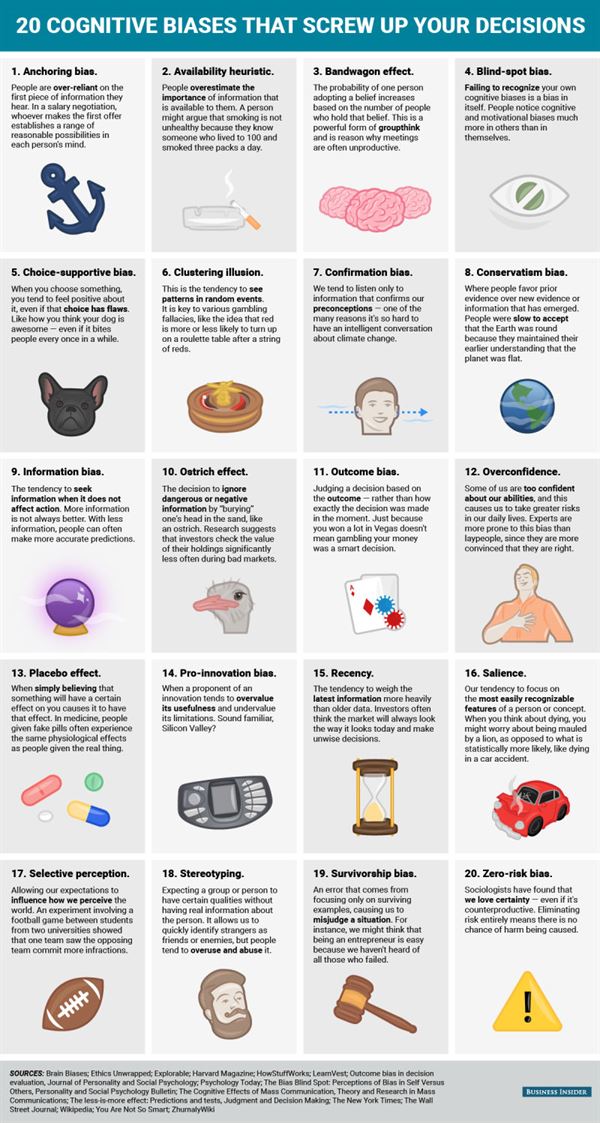 Anchoring bias – People are over-reliant on the first piece of information they hear. In a salary negotiation, whoever makes the first offer establishes a range of reasonable possibility in each person’s mind.

Availability heuristic – People overestimate the importance of information that is available to them. A person might argue that smoking is not unhealthy becasue they know someone who lived to 100 and smoked three packs a day.

Bandwagon effect – The probablity of one person adopting a belief increases based on the number of people who hold that belief. This is a powerful form of groupthink and is reason why meetings are often unproductive.

Blind-spot bias – Failing to recognize your own cognitive biases is a bias in itself. People notice cognitive and motiviational biases much more in others than in themselves.

Choice-supportive bias – When you choose something, you tend to feel positive about it, even if that choice has flaws. Like how you think your dog is awesome – even if it bites people every once in a while.

Clustering illusion – This is the tendency to see pattern in random events. It is the key to various gambling fallacies, like the idea that red is more or less likely to turn up on a roulette table after a string of reds.

Confirmation bias – We tend to listen only to information that confirms our preconceptions – one of the many reasons it’s so hard to have an intelligent conversation about climate change.

Conservatism bias – Where people favor prior evidence over new evidence or infomration that has emerged. People were slow to accept that the Earth was round because they maintained their earlier understanding that the planet was flat.

Information bias – The tendency seek information when it does not affect action. More information is not always better. With less information, people can often make more accurate predictions.

Ostrich effect – The decision to ignore dangerous or negative information by “burying” one’s head in the sand, like an ostrich. Research suggests that investors check the value of their holdings significantly less often during bad markets.

Outcome bias – Judging a decision based on the outcome – rather than how exactly the decision was made in the moment. Just because you won a lot in Vegas doesn’t mean gambling your money was a smart decision.

Overconfidence bias – Some of us are too confident about our abilities, and this casues us to take greater risks in our daily lives. Experts are more prone to this bias than laypeople, since they are more convinced that they are right.

Placebo effect – When simply believing that something will have a certain effect on you causes it to have that effect. In medicine, people give fake pills often experience the same physiological effects as poeple given the real thing.

Read Another Confession:   Ways Of Remodeling Your Kitchen On A Tight Budget [Infographic]

Pro-innovation bias – When a proponent of an innovcation tends to overvalue its usefulness and undervalue its limitations. Sound familiar, Silicon Valley?

Recency – The tendency to weigh the latest information more heavily than older data. Investors often think the market will always look the way it looks today and make unwise decisions.

Salience – Our tendency to focus on the most easily recognizable features of a person or concept. When you think about dying, you might worry about being mauled by a lion, as opposed to what is statistically more likely, like dying in a car accident.

Selective perception – Allowing our expectations to influence how we perceive the world. An experiment involving a football game betwen students from two universities showed that one team saw the opposing team commit more interactions.

Stereotyping – Expecting a group or person to have certain qualities without having real information about the person. It allows us to quickly identify strangers as friends or enemies, but people tend to overuse and abuse it.

Survivorship bias – An error that comes from focusing only on surviving examples, cuasing us to misjudge a sitaution. For instance, we might think that being an entrepreneur is easy because we haven’t heard of all those who failed.

Zero-risk bias – Sociologists have found that we love certainty – even if it’s counterproductive. Eliminating risk entirely means there is no chance of harm being caused.

What Are The Best-Performing Crypto Currencies? [Infographic]
NFT Cities: Which Global Cities Are The Most Popular For NFTs?