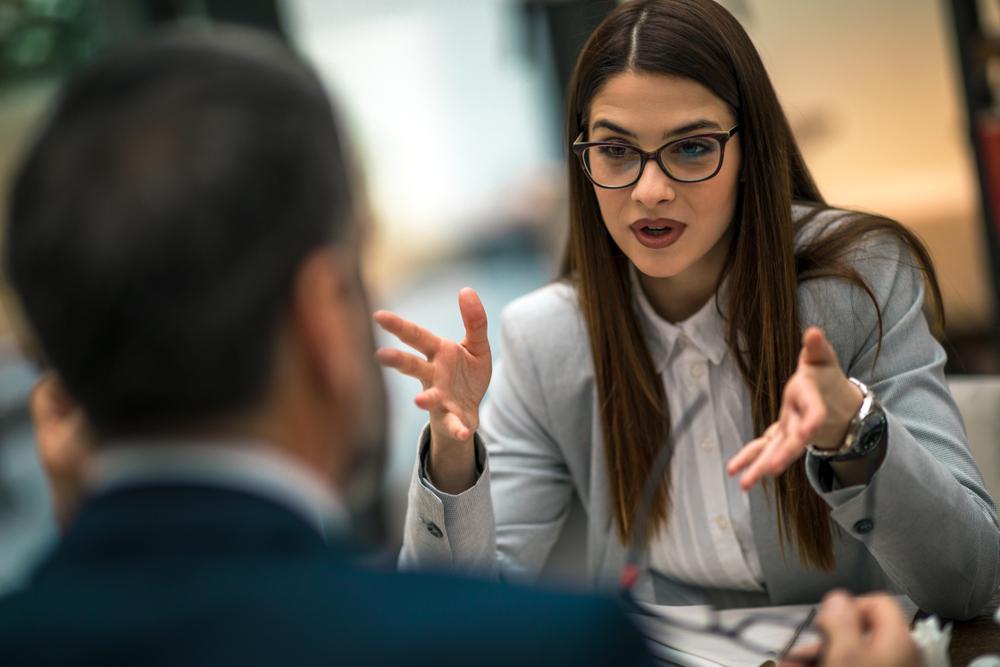 Body language can be a powerful tool that, when used correctly, can help you land your dream job. Of course, the opposite can also be true. The way you sit or stand, your eye contact (or lack thereof) and even the way in which you fold your arms can give off negative nonverbal cues that may ultimately end up costing you the position.

So how do you ensure that your nonverbal cues accurately reflect the words you speak? Here are a few ways your body language could give hiring managers the wrong impression—and what to do instead.

1. Slouching in Your Chair

Slouching isn’t just bad for your posture. It’s also a red flag for hiring managers. Slumping in your seat can convey boredom, insecurity and anxiety.

In fact, not only can slouching in your seat make you look insecure, it can also make you feel insecure. In a 2009 study from Ohio State University, researchers found that students who sat up straight were more likely to believe in their own qualifications for a job compared to students who slouched in their seats.

Read Another Confession:   Where Sports And Retail Collide [Infographic]

What to Do Instead: Obviously, the thing to do is to sit up straight during an interview. But be careful not to sit too stiff, as this can convey tension and anxiety.

Maintaining eye contact for too long can come across as aggressive, while looking down or away from the interviewer can be a sign of disinterest or insecurity. In that case, how much eye contact is appropriate?

You don’t need to gaze directly into the interviewer’s eyes. If it makes you more comfortable, go ahead and look at their mouth or their ear. According to a 2019 study published in the journal Perception, looking indirectly at the other person’s face can be perceived as eye contact.

3. Having a Sloppy Appearance

While body language generally refers to movements or gestures, it’s worth mentioning that your appearance can also be a subtle form of nonverbal communication. Showing up to your interview with messy hair, pimples on your nose and an untamed beard isn’t going to make a good first impression on a hiring manager.

According to research from Cornell University, first impressions can last long after the initial encounter and are notoriously difficult to change once an opinion has been formed. By putting your best face forward, you can make a solid first impression that won’t hurt your career.

What to Do Instead: Get on a skin care routine that will clear up your skin and make sure to keep your beard tidy with beard care products. Don’t forget to trim your nails, style your hair and take extra care with your shave routine to avoid razor burn/ingrown hairs.

Read Another Confession:   Be Productive Working At Home [Infographic]

People may cross their arms for variety of reasons. Oftentimes, we do it because the AC is blowing hard and we’re cold.

There is even some research to suggest crossing one’s arms can improve spatial thinking and lead to better brainstorming sessions.

But for the sake of your job interview, crossing your arms may not be a good idea. Many people consider crossed arms as a sign of defensiveness or disinterest.

What to Do Instead: If you get the urge to cross your arms, consider going with a safer hand gesture instead, such as “the steeple.” The steeple is a hand gesture performed by placing the fingertips together. This gesture communicates confidence and is commonly used by world leaders.

If you’re a chronic fidgeter, be careful. Fidgeting during an interview can make you come across as someone who doesn’t do well under pressure and can’t handle difficult tasks.

In a similar vein, avoid gesturing too much with your hands. Being a “hand talker” can be distracting and can signal that you’re out of control.

What to Do Instead: You shouldn’t avoid hand gestures altogether. Some hand gestures—like the steeple—can be viewed positively during a job interview. If you want to signal honesty and openness, try keeping your palms slightly open at a 45-degree angle.

6. Talking Too Fast or Too Slow

If you’re naturally a fast talker, you may need to slow it down a little for your next job interview. Talking too fast can make you appear chaotic, emotional and out of control.

Read Another Confession:   What Your Career Says About You

Talking too slow can also have consequences in a job interview. According to a 2015 study published in the Journal of Business and Psychology, researchers found that slow-talking job applicants were perceived as being more anxious and had lower interview performances.

What to Do Instead: To slow down or speed up your speech rate, practice using a metronome. You can download a metronome app which can help you keep pace and talk at a certain speed.

Smiling during an interview is important because it generates confidence and conveys trust to the interviewer. However, be careful not to force it. Having a fake smile plastered on your face for the entire interview can come across as creepy and insincere.

Additionally, most people can separate a fake smile from one that is genuine. An authentic smile reaches the eyes and makes the corners wrinkle slightly—aka, a Duchenne smile.

What to Do Instead: Smile occasionally to convey confidence—preferably, during moments when you are genuinely passionate or enthusiastic about something. This way, the smile is more likely to come from a sincere place.

The words on your resume will get you in the door. The words you say aloud can help you sell your qualifications. But it’s your nonverbal communication that often speaks the loudest during a job interview. Be mindful of your body language, practice your weak areas and you can increase your chances of employment.