Everything You Need To Succeed In Business IT 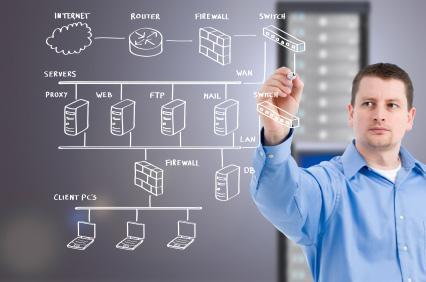 The business landscape of is more technologically advanced than ever before. As new innovations continue to emerge it can often be difficult to track the basic IT tools your business needs. This infographic from Exigent Networks outlines the basics of Business IT. Discover the various operating system options, both desktop and networking, and learn about the various telephony options available to a modern business. This infographic from Exigent Networks covers everything business owners need to better understand their IT requirements.

Communication is key to almost every business, and a phone system is a must. There are two viable options, a landline or PSTN (public switched telephone network) or VoIP (voice over internet protocol). A PSTN system is an analogue system that runs over traditional telephone writing, while a VoIP system operates via the internet.

The business software market has emerged and adapted to meet the changing workplace. While Microsoft office remains as the king of the workplace software market various apps and software programs are emerging, often free and user friendly. Online, cloud-based programs are becoming more and more popular with programs like Tictail, Insightly and Asana growing in popularity.

The basics of business IT

EVERYTHING YOU NEED TO SUCCEED

Today’s business landscape is more technologically advanced than ever before, and with new innovations emerging everyday it can often be difficult to track the basic IT tools your business needs.

VoIP
VoIP phone systems use the same Internet connection that a company is already using to get online.

Windows
With almost 90% of the workstation operating system market share, Windows is well known. Windows, having been introduced in 1985, is a very mature and complete piece of software.

Mac OS
Apple’s Macintosh OS is even older than Windows. It is the first ever successful graphical-based operating system, released in 1984.

Read Another Confession:   Degree vs. Experience: How Important Are Degrees To Employers?

Linux
Linux is GNU’s answer to Mac and Windows. Linux is a younger player in the OS world, having  been written in 1991, and is optimized for modern use more so than Windows and Mac.

Valve’s SteamOS is currently in beta, and is being positioned as a new PC gaming operating system. In 2015, you’ll be able to buy PCs that come with SteamOS pre-installed, known as Steam Machines.

Android was originally designed for smartphones, but you can now get Android laptops and even desktops. Intel even develops their own port of Android to PC hardware.

ReactOS is a free, open-source re-implementation of the Windows NT architecture. This operating system is considered alpha. Its current goal is to become compatible with Windows Server 2003.

Unlike many of the other operating systems listed, SkyOS is proprietary and not open-source. Development on SkyOS ended in 2009, but the last beta version was made available as a free download in 2013.

FOR BACKUP AND RESTORATION

LiveChat
If real-time customer service and interaction is central to your business’s success, take a look at LiveChat. Businesses can integrate LiveChat and provide customers with real-time communications without going the expensive and unsatisfying call-centre route.

Tictail
If you run an online business, a professional, polished Web presence is a must. Tictail is an online platform that allows anyone to set up a virtual store quickly and easily.