Coffee: The Truth about Your Morning Fix [Infographic]
Workplace Crush 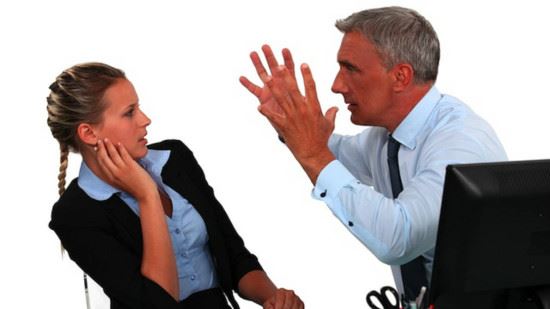 Obviously there are a lot of bad bosses running around out there in the business world. But there is some good news, because you can manage that craziness with a bit of preparedness. These are eight signs that your boss is crazy.

1. The Guy is Insulting

A good boss will take the time to explain why you didn’t meet expectations, as well as suggest changes he’d like to see next time. But on the other side of the coin, there’s the crazy boss who puts down your work without ever supplying any constructive criticism.

How to Manage Him: If he’s not forthcoming about why he’s not happy with you, you should take steps to prevent being berated. When you get an assignment, ask him exactly what he wants you to do, and then be sure that you are absolutely clear on his instructions before you start. If he is still being tough on you and you don’t know what you did to deserve it, just take a deep breath and ask.

2. He fails to make you feel appreciated

Behind most good bosses is a good support team. Good bosses recognize that they really need those people behind them and would be lost if they quit. The bad bosses have a bad habit of never praising anybody, not just you.

How to Manage Him: It’s never a good idea to try to coerce compliments, but asking for feedback is the necessary evil in this case. Try this: “I’d really like to help to make your job easier, so could you please tell me what I’m doing well, and what you think I could do to make things better?”

Read Another Confession:   The Rise of Virtual Assistants [Infographic]

3. He Takes Credit for Other People’s Accomplishments

This is sadly true. A good boss knows his success begins with making employees feel that they are appreciated. A bad boss fails to give you recognition for anything you’ve accomplished. Even worse, sometimes they claim your accomplishments as their own.

How to Manage Him: Confronting him probably won’t get you the results you want. If you think he’s receptive, you might try framing the conversation in a non­-accusatory way: Such as, “I was really hoping that I would get promoted this year, so it would be great if you could help me make others aware of my accomplishments.” And be sure to remember to claim credit for work that you did. That way, the rest of the team knows about it before he has a chance to claim that he did it himself.

4. He Makes Everything a Fire Drill

A good boss helps keep drama to a minimum and not create it. The effect of a manager who loves assigning tasks that were “due yesterday” is a staff that can’t function anymore, with everybody unable to tell what’s urgent and what’s not.

How to Manage Him: Stay one step ahead of her craziness and you’ll go far. That means understanding his trigger points. Maybe he always freaks out at the end of the month when earnings are posted, or before a weekly meeting with his manager. Ask him to help you rank by priority exactly what he needs from you each week, and get it in email so you can prove it. Then you’ll at least have an explanation if he flies into a tantrum the next time he gives you a task.

A good manager will help you build your skills by challenging you to do more than what you thought you could. But, not
everyone is cut from that same cloth. If it’s impossible for you to send a single email without him proofreading it, you may be working under a control freak or at least a guy who’s really insecure.

Read Another Confession:   Rise of the Expat-preneur [Infographic]

How to Manage Him: While it’s tempting to shut down out of sheer frustration, the key is to communicate more than you think you need to communicate so that you can earn the guy’s trust. For some unexplained reason, he’s feeling skittish. So, don’t make any surprise moves, at least for the immediate future, and tell him exactly what you’re doing and why you’re doing it. Be sure to share updates and give progress reports. Make the guy feel like a trusted adviser by asking for his input and advice. 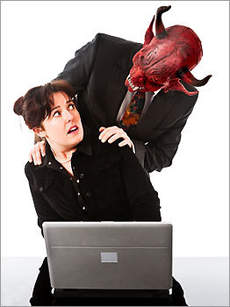 Effective workplaces thrive on everybody being open, but that doesn’t mean some managers don’t choose to be crazy instead. The problem is that when communication shuts down, more and more problems will arise, and everybody will be scared to ask for help in solving them.

How to Manage Him: You shouldn’t have to deal with a boss that’s insufferably mean, or even abusive. Try to understand where the crazy behavior is coming from, and always try to be polite, clear, honest and direct with the guy. If the situation doesn’t improve, you might have to consult another manager, or the Human Relations Department, on how best to proceed.

On the other end of the coin there are situations where a boss might actually be too nice. The problem is that your bonus and review are dependent on what the guy thinks, so any superior who holds back his true thoughts just isn’t doing you any favors.

How to Manage Him: With a boss like this, you may just have to wind up begging for bad feedback. If he’s always telling you that you do a great job, tell him that you think you could do even better if he could tell you a few areas where you could improve. Tell him that you enjoy having him as your manager, but you also want your career to advance, and that he could help you by telling you exactly where the areas are that will help you to grow in the company.

We wish that all managers would want to treat everyone under them fairly. But it’s human nature for him to “click” with some people under him a little more than others. That can become a problem when one employee is favored over another with more responsibility based on his preference and not their performance.

How to Manage Him: Yes, you are right, it is not fair, but this is one time when it just might be best to ignore the problem. That’s because if you complain, it will almost always never change his mind. You can resist the temptation to tell your co­-workers, or gossip about him, or keep a tally of what the preferred person got that you didn’t, but it won’t do any good. What you need to do is keep a close eye on what you are doing right. Schedule time with your boss to show him what you consider your career goals, figure out what behavior he likes in that other person, and then be sure to exceed your goals. In the end, that’s the key to coming out ahead when you’ve got a crazy boss.

About the Author
Elita works as an Editor for KEY Difference and is always interested in learning about Digital Marketing.

Coffee: The Truth about Your Morning Fix [Infographic]
Workplace Crush