Sexy Latina From The Second Floor 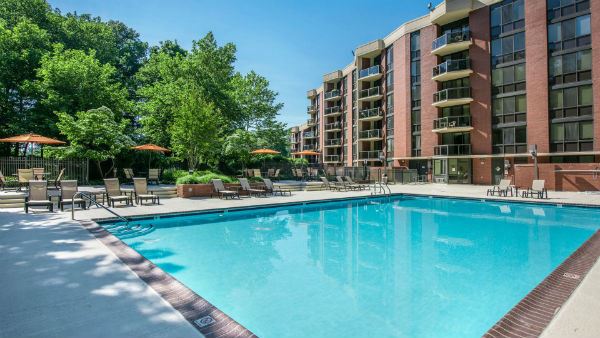 I live in a nice apartment complex, where things are mostly quiet. I wanted something simple and close to where I work. I found it and it included utilities, and nice outdoor pool. The tenants pass each other, say hi, but that’s about it. Everyone minds their business, do whatever they do, go to work, and mostly keep to themselves. Occasionally, there are social events, but people come and go. It’s just the place you want to be if you don’t want to be bothered.

After work, I usually head to the pool, swim for a half hour, and then relax outside of the pool on nice nights. No one else is usually up that late, so I can enjoy the pool area to myself.

I had been hanging out one night half naked with a towel covering, thinking no one else was around, when this really hot woman walked out with this guy. This woman had recently moved into the apartment. She apologized, but I urged her to continue her date and hop in the pool, as I was just getting ready to leave anyway. She was a gorgeous sexy Latina woman, big breasts, a gorgeous butt, wonderful head of hair, and lips and eyes that would make any man melt. I ended up leaving them to do whatever they were planning to do and fantasized about her as I walked back to my apartment and went to bed.

Read Another Confession:   Find A Job Without Professional Experience

A few days later, I saw that hot Latina cutie again coming out with another guy, heading to the pool area, doing her thing, and later on heading back to her apartment with him, down the hall from my apartment. I wasn’t stalking, but I do work the evening shift, so returning home at night, doing my thing, getting to the pool early enough for there not to be anything weird going on and late enough for all the children to not be in the pool.

This continued for over 2 hours. I may be a pervert, and I was in the right place at the right time. There is nothing hotter than hearing a woman getting fucked right and fucked hard with pleasure. No greater sound or feeling than a woman who has an earth-shattering intense orgasm. From the sound of her moans, her voice, talking dirty in Spanish, her multiple orgasms, I could only tell it was that sexy Latina girl from down the hall, probably with another man. Whoever that man was, I envied him for the hot passionate love-making he was doing to her that night, not for just making her cum once, not even twice, but it must have been at least a half dozen times.

Read Another Confession:   How To Buy The Wrong House [Infographic]