BSN Requirements To Be A Nurse get a Bachelor of Science in Nursing (BSN).

Obviously, the ADN represents a faster path to full-time employment, and because the degree program is so much shorter, it’ll also save you a lot of money in tuition. ADNs are also usually conferred by community colleges, another reason they cost less. For many hospitals and clinics, it doesn’t matter whether you have an ADN or a BSN, as long as you’ve passed the NCLEX exam and become a registered nurse (RN).

So, if you don’t need a four-year degree to become a nurse, why get one? If you want to work in a hospital setting, it might be a good idea to go ahead and get your BSN, because increasingly, hospitals are requiring nurses to have a four-year degree in the field. You’ll have more career options with a BSN, since it will qualify you to move into a management role, become a nurse educator, or even to pursue an MSN and become a nurse practitioner.

The BSN Is a More In-Depth Degree

Up until the 1980s, many registered nurses didn’t go to nursing school at all. Instead, they earned diplomas in nursing conferred by hospital teaching programs. After these programs were phased out, most aspiring nurses turned to ADN programs, largely administered by community colleges, in order to get the qualifications they needed to pursue a career in nursing. Two-year nursing degrees became the norm after WWII, when the programs were originally promoted as a way to end the era’s nursing shortage.

RNs perform the same tasks in a hospital setting no matter whether they have a two-year degree or a four-year degree, but BSN holders receive more in-depth training during the extra two years of education. The ADN program teaches would-be nurses the practical skills they need to care for patients. BSN programs teach students these same practical skills, but also give them a background in nursing theory, research, public health, leadership, health care financing, systems thinking, and policy. Studies suggest that more-educated nurses provide better patient care. BSN holders also have the leadership skills necessary to take on a supervisory role. Later in their careers, BSN holders are qualified to become nurse educators, which are sorely needed to train the next generation of nurses. 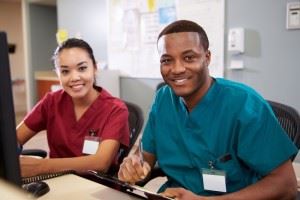 Hospitals Are Now Requiring Nurses to Have BSNs

While plenty of hospitals are still willing to hire RNs with two-year degrees, more and more institutions are requiring that nurses have BSNs. They believe RNs with four-year degrees provide better patient care, and considering how high the stakes can be in a hospital setting, a little extra training for nurses may not be such a bad thing.

Gloria Donnelly, dean of the nursing college at Drexel University in Philadelphia, told The New York Times, “There are several hospitals in our region, like Abington, that will hire nonbaccalaureate nurses but give you a certain number of years to finish the baccalaureate, and some that won’t even interview you without it.”

Enrollment in two-year ADN programs is still high, but many aspiring nurses are opting to go for a BSN right out of the gate. As of a 2008 federal survey, 39 percent of recent nursing school graduates held BSNs from four-year nursing programs. More experienced nurses who have already been in the field with an ADN aren’t left out of the loop. These RNs can go to school online for an RN-to-BSN; as of 2012, enrollment in RN-to-BSN programs was about 90,000. In 2002, fewer than 30,000 people were enrolled in such courses.

Online RN-to-BSN courses suit many veteran nurses because these days, most people go into nursing as a second career. ADNs are attractive to adults who have families to support and need to start earning a decent paycheck as soon as possible. RN-to-BSN programs make it possible for these professionals to keep working and supporting their families, while earning the qualifications they need to continue paying the bills for decades to come.

You don’t really need a BSN to become a nurse — but that’s changing. Hospitals are beginning to require their nurses to hold a four-year degree, and those who don’t have one risk losing their jobs if they don’t complete courses within a certain amount of time. If you’re considering becoming a nurse, you may want to go ahead and get the BSN now. If you’re already an RN with an ADN, you can enter an online RN-to-BSN program to get the additional qualifications you need to safeguard your career.

Read Another Confession:   Five Qualities That Every Professional Must Have