Convincing Love and Romance On Screen

When it comes to natural chemistry and romance, most humans can easily detect it. When you meet someone for the first time, you begin to like them, and it is really up to them to meet your expectations and continue that like, which can grow in seconds to instant attraction, chemistry, or romance, or falter away into oblivion and become absolute disappointment. In the same sense, they must also like you and it can either grow stronger or falter away just as fast. When it comes to chemistry and romance in acting and on the big screen, it is always interesting to see how two people, usually an actor and an actress, will play it out. Sometimes it works and sometimes it does not. The audience can certainly tell whether two actors have chemistry or not.

Two actors, especially two people in a movie or a show, who are supposed to have been married for a few years, or just met, need to act the part. While it is all just part of the script, if the actors have no chemistry at all, the cameras rolling will show that the chemistry is just not there. There have been plenty of movies that showed two actors not feeling it towards each other. In other words, the relationship feels uncomfortable, unreal, forced, faked, as if they are both trying to get through a scene in a script.

There are even husbands and wives who work together and while some can make it work and the scenes seem fairly natural and unforced, there are other scenes where even husband and wife, working together sound like they are reading a script to each other, rather than naturally being comfortable around each other.

After all is said and done, it is the audience that needs the most convincing that these two people, these two actors, have romance and chemistry together. The most natural chemistry that makes it work onscreen is to have natural chemistry offscreen. This involves the process of getting to know each other, hanging around each other, and feeling comfortable around each other. This can usually be developed in the form of a good friendship or just good company. Good actors and actresses can certainly pull it off and convince the audience they are madly in love with each other, or at least have feelings towards each other.

There are plenty of actors and actresses who pull it off so well, who have worked together for just a few days to a few months, and although they may have nothing to do with each other’s personal lives offscreen, on the big screen, it is like they have known each other for years, are madly in love, and have such chemistry and romance that seems almost unnatural, unforced, and completely realistic. It is almost hard to believe that when the cameras stop rolling, these two go their separate ways instead of heading to one dressing room to just make insane crazy love with each other.

While I could sit here and list a few dozen celebrities who have done this, as well as another dozen celebrities who could not pull it off at all, one couple always stands out in my mind, my favorite onscreen couple, and I remember them well, because I had developed such a crush on this woman, and still think she is beautiful to this day.

Read Another Confession:   The Office Refrigerator

Her history is that she had some painful nose job plastic surgery, not common at that time, which helped boost her career. She is no longer living, however, while her counterpart and TV husband is still currently alive, though much older, and still working today. They were not married in real life and only worked together for the two or three years, and 64 episodes, that the show was on air, but their love onscreen was very real and very convincing. From the first time they met, he was head over heels in love with her, and she could not look away from him.

The show is claimed be the first ever to portray “the first married couple on television who seemed to have an actual sex life.” The natural grace of their glances at each other and the touching and rubbing went beyond what television ever portrayed in other shows. The show was certainly never afraid to explore the sexuality and sensuality between a romantic couple who were madly in love with each other at that time. Throughout the show, the eyes of the actor and actress told the story of how romantic and amazing their sex life must have been. In real life, however, they were never a couple, they were never married, and they never had sex, but they were good friends. Onscreen they managed to make their audience feel as if they had been and were still madly in love with each other after 13 years of marriage.

The love-at-first-sight episodes made their entire marriage what it was throughout the show. The chemistry and romance seen in those episodes are exactly what we saw throughout the entire series, from their marriage, to their children, to their adventures together, to how they were one of the weirdest strangest families anyone had ever seen, and yet, the love seemed too real, too good to be true, and it just worked. 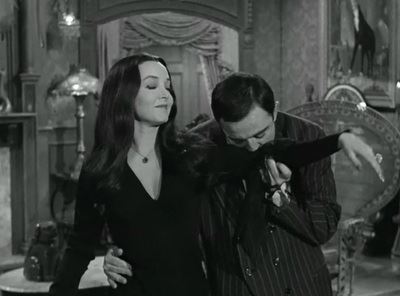 It was and still is one of my favorite shows and I cannot help but enjoy the convincing love scenes we see on screen. While I positively favor the more recent Addams Family movies (1991 and 1993), in which Raúl Juliá (as Gomez) and Anjelica Huston (as Morticia Addams) did well to play a married couple romantically in love, the show seemed more in tune with being focused mainly on the couple, rather than a little bit of everything, showing us so much more romance and chemistry, exposing us constantly to the two convincing love birds.