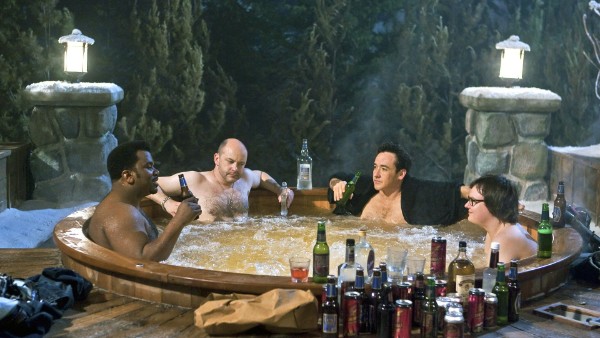 Me and a friend went to a party over the weekend. I didn’t really know anyone but my friend had a few acquaintances there, one of whom had invited him to the party. The party ended up being a bit more than casual and everyone was getting drunk and having a pretty good time. All in all we were all there to hang out and enjoy ourselves.

There was a hot tub there so me and my friend took off our clothes and hopped in with just our boxers on. We could still see our clothes from afar so we knew they would be safe in our sights from all the other people at the party. Besides, the people who were all there seemed chill and there was nothing to worry about.

As we and a bunch of other people were sitting in the jacuzzi, relaxing and talking, the guy who owned the place and had the party was out and about, not being the greatest host, but he was around, getting just as drunk as everyone else. While I had no money on me, just a few credit cards, my friend had cash in his wallet.

Across the room, we watch as the host of the party walks over to our clothes, feels inside the pockets, and takes out our wallets. He looked in mine, saw the credit cards, and tossed it down on the floor. He then gets to my friends pants and takes the wallet, opens it up, and sees the cash. He takes the cash right out of the wallet, which amounted to about $400.

My friend sees this, caught him red-handed in the act, along with anyone else who happened to be watching, and hopped out of the hot tub to confront the guy. My friend kindly asked for it back and the guy said, “No, get the fuck out of here.”

Again, my friend asked politely for him give to it back and he would be cool with it and everything could go back to normal. He explained that he knew that mostly everyone was drunk and it wasn’t going to be a big deal if he gave the money back to him. The guys insists that the money is his and walks away, threatening that he will force us out of his house if we continue to bring up the money issue.

My friend was certainly more calm than I ever would have been. My friend did not want to get into a fight because this was the house of the guy who knew most of the people at the party. My friend silently grew pissed, and we both decided to leave. Not before, however, my friend got all of the information about the guy; his name, his address, his phone number, where he worked, etc. With everyone drunk, the information was given freely without a second thought from any of the guy’s friends, including the guy’s wife.

Little did I know as well, that my friend was already plotting his revenge. The whole scheme took a few weeks and I don’t even want to tell you what he did to get back at him, and I’m not even kidding you as I write this…

But, to get back at him, he paid a homeless guy, who was happily willing to do it for fifty bucks, to sneak into his place of work while most of the office and the guy were on lunch break, go into his cubicle and take a shit on his desk, and then walk out. My friend had known someone who worked at the guy’s job, so he was able to get information as to when everyone went to lunch, and find out quickly what happened that day.

Before anyone could figure it out, the homeless guy was already gone out of the office building. Everyone did eventually notice once they stepped back into the office that something happened because the stench of it was awful and eventually tracked it down to the guy’s cubicle.

It is funny, because everyone at work will always wonder why someone would come into an office and take a shit on someone’s desk. Not only that, but he will always have some weird fucking stigma around him now. Someone usually just doesn’t come into some random office and take shit on someone’s desk for no reason. I am sure the look on their faces was be priceless and nobody will ever forget the guy who’s desk got shit on.

My friend never did get his $400 back, but for him, the $450 was totally worth it.
ONET Insights: Extruding, Forming, Pressing, and Compacting Machine Setters, Operators, and Tenders
Lack of Christmas Parties At Work