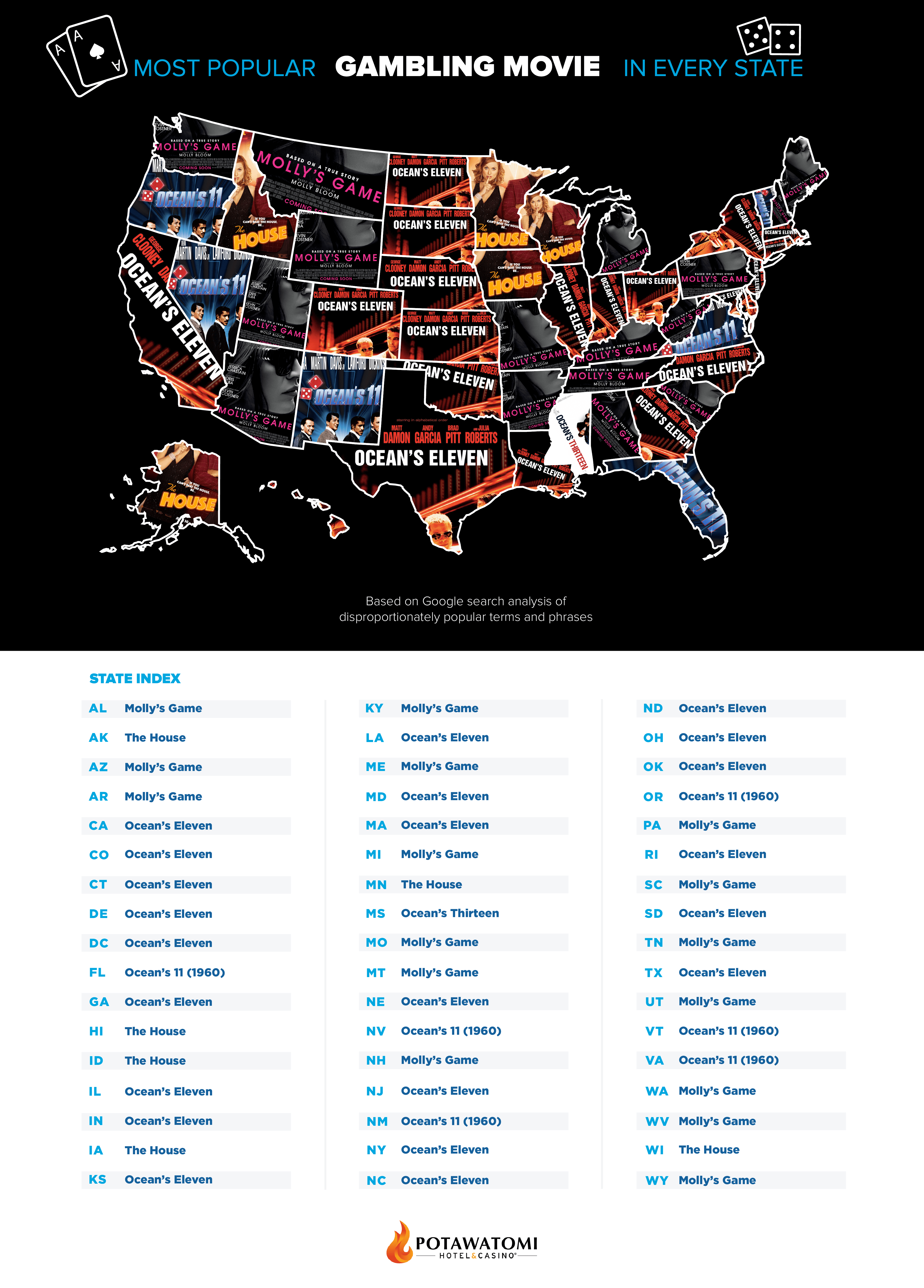 Whether you’re an avid fan of the Ocean’s series, or you’re into dramas like Molly’s Game and Uncut Gems, there’s certainly no shortage of films about gambling to binge watch. Especially during this last year where binge-watching has become a prominent hobby during pandemic lockdowns, which gambling movies are the most popular in every state?

Potawatomi Hotel & Casino analyzed Google searches across the country to determine which gambling movies are at the top of the “must watch” list in all 50 states.

In looking at nationwide results, Adam Sandler’s acclaimed drama, Uncut Gems, ranks as the most-searched movie about gambling in the U.S., according to Google. Coming in at No. 2 is Ocean’s Eleven, which is celebrating its 20th anniversary this year. The third most-searched movie about gambling is the twenty-first James Bond film, Casino Royale, starring Daniel Craig. The film features Bond in a high-stakes poker game, which takes place at the Casino Royale in Montenegro.

According to the analysis, Ocean’s Eleven is the most-searched gambling movie in 21 states, which makes it the film with the most appearances on this list.

Read Another Confession:   5 Reasons An Office Renovation Will Help Business

Considering 2021 marks the 20th anniversary of Ocean’s Eleven, Americans were also surveyed to get feedback on the film and series. According to respondents, Ocean’s Eleven is the most popular in the series followed by Ocean’s Thirteen, Ocean’s Twelve and Ocean’s Eight. Overall, 62% of respondents said a new Ocean’s film should be made.

Following the Ocean’s series, the second most popular film is the 2017 movie, Molly’s Game, starring Jessica Chastain, Idris Elba and Kevin Costner. The film is based on the true story of an Olympic-class skier, Molly Bloom, who ran the world’s most exclusive high-stakes poker game.

Take a look at the Potawatomi Hotel & Casino or view the infographic below.