A Comprehensive Guide: Animation as a Career Option
7 Tips to Become a Successful Web Designer

“Stay True To Yourself” – Lindsey Stirling If there is anyone who knows rejection, she had to face it on national television on America’s Got Talent. With that rejection, instead of letting it get her down and stop her dead in her tracks from ever following her passion, she took that rejection and turned it into an opportunity. Lindsey Stirling is hope and inspiration to all and has much to offer the world every time she picks up her violin and plays music.

Lindsey Stirling was born in Santa Ana, California, but is from Provo, Utah. While her family had financial struggles in her childhood, this did not stop her from pursuing the violin at age 5, which led her down a great path to producing her own music. In her performance of music, she began to multi-task, while dressing up in costume, and uniquely dancing, all while playing the violin. In a YouTube video, she challenges her cast mates to perform the way she does. They all do their best, but none can match the skills of the wonderful and talented Lindsey Stirling.

Read Another Confession:   Everyone Is A Movie Critic

I have a love for trance, techno, and dubstep, which often gets me through my workday. In my quest for new music, I came across something that caught my ear, the song played on Pandora. It was the sound of one of the most wonderful instruments in the world. It has been a long time since I have heard someone play a violin like the way this one sounded.

The song was Crystalize, a song Lindsey Stirling was heavily promoting, which I also found on YouTube. It was a song in which she had tried a new experiment: violin with dubstep. It has such harmony, rhythm, and melody to it, that it sends you into a trance of wonder and relaxation. I began to listen to her other music, all just as uniquely impressive.

While the judges of America’s Got Talent were certainly harsh, a performance and judgement that Lindsey herself has admitted she cannot bear to watch, her performance was certainly not her best, and objectively, the judges made their decision based on what they saw. She has come along way since then, learning how to balance her dancing, her violin and music, and all things happening around her on stage.

Lindsey overcame this rejection, took it as a learning experience, and looked past the judgement because she knew in her heart that she had something to offer the world, a passion and desire that was beyond human comprehension, an imagination that only her soul within knew and could spread.

No one was going to deny her ever again. As you watch her performances, her interviews, and her YouTube personalities, you can see that Lindsey Stirling is a very optimistic woman, a musician, a violinist, with a great sense of humor and a very positive attitude. She is an inspiration to me and if you happen to follow her, there is no way you cannot feel that she spreads a lot of greatness to the world, with her music and her personality.

Lindsey Stirling was told by the judges on America’s Got Talent that she would not make it, that she needed to be a part of a group, that she could not fill an auditorium. Since then, Lindsey has filled concert halls, as she travels the world, including non-English speaking countries, performing at huge concerts and selling out many venues. 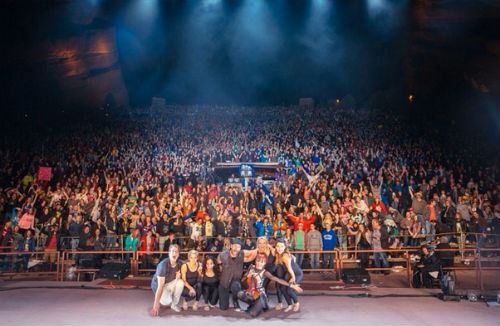 Lindsey Stirling at Red Rocks in Morrison, Colorado
(can you find me in the photo?)

Lindsey is not only an inspiration by her music, but by what she has accomplished. Her passion of music and playing the violin is her career and her life. She is a prime example of doing what you love and getting paid to do it. She loves her fans, interacts with her fans, and enjoys and appreciates where she is in her life. She seems very humble in knowing that while it is her music that has helped contribute to her success, it is also her fans, who appreciate her music, that have ensured she has become a success.

Her music is mesmerizing, powerful, inspirational, amazing, awesome, and out of this world. I highly recommend you give her music a chance and let your soul be open to it. It will transform you and make you feel incredible.

Please continue to be the charming inspirational young woman you are!

Thank you Lindsey Stirling for being you!

Read Another Confession:   ONET Insights: Molders, Shapers, and Casters, Except Metal and Plastic

Here are just some videos to get you started!

A Comprehensive Guide: Animation as a Career Option
7 Tips to Become a Successful Web Designer