The Greeter Sees All and Knows All 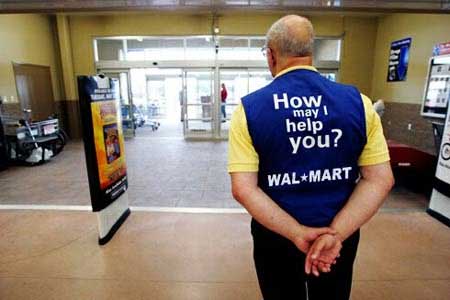 Greeters usually stand at the front of any store, welcoming you into the store by saying, “Hello”. When you leave, the greeter may even say things like, “Have a nice day” and “I hope you enjoyed shopping at our store.” Greeters may also check your receipts to ensure that you have bought all the items are are not attempting to steal anything. They are not security guards and they are certainly not the police. These greeters’ job may seem like the most easiest job in the world, and it may seem like they are doing nothing. Anyone can do nothing for 8 hours. Greeters are normally elder people or handicapped people who are meant to be the first people you see when walking into the store and the last person you see when leaving the store. Greeters can be male or female and may be offered a chair to sit, or be required to stand the entire shift. Walmart is a corporation known for having greeters at the door.

Read Another Confession:   Welcome to The Friend Zone

While it may be unintentional, stores with greeters are more likely to attract repeat customers. There is something about having a human Greeter at the door. It may be an underlying bother to some, but most people probably do not mind it. They usually walk past the Greeter, ignoring him or her to do their shopping, and leaving the store without ever even saying a word to the Greeter. People may think the job of a Greeter is the lowest level job anyone can possibly have, but the job of a Greeter is probably the most underrated  job in the store. The Greeter does not have any back breaking work to do unless the requirement is standing on their feet for prolonged hours during their shift. It may seem like the easiest job in the world and a job that many people would love to have, but such a job may be mundane and menial.

Greeters are only likely to make minimum wage and are usually part-time workers. If the Greeter is an elder gentleman or gentlewoman, they are most likely working because they want or need to work. They are often retired and looking for something to do during the day or could use the extra money to afford a few extra accessories in their lives. The job allows them to make some extra money and bring in an additional paycheck, aside from their social security or retirement check. They are not looking for a job that requires them to lift, lean over, or count money. They are usually not looking to be in management positions or even jobs with lots of responsibility. In fact, they are probably happy to have as little responsibility as possible. However, they actually have some responsibility, whether they know it or not.

Read Another Confession:   The “Potato Effect” In Business

The Greeter has an important uncover and secretive job that the greeter may not even know about. Whenever a store has a Greeter right at the entrance of the store, they are welcoming customers inside the store to shop around, as well as saying goodbye to customers who are leaving the store. They are also there to remember the faces of people who walk in and are witnesses to anyone who tries to walk out with stolen items. While they personally cannot stop anyone from stealing or tackle anyone to the ground, they are the best witnesses for Loss Prevention and Security, whom may be running out the door. They may be asked to identify repetitive thieves who are daily shoppers and continue to get away with their actions, either in person, or on a security camera. In more dangerous areas, a security officer or a police officer may be required instead of a Greeter.

Companies that hire Greeters are doing a great service for the job market. There is a great service in a company that has a Greeter at the door. There are many benefits to hiring Greeters, though only one or two are actually needed at the door. While a company can choose who to hire, it is a great community service, especially when the company chooses to hire Elder people and provide them with jobs that feel meaningful and do actually have a purpose in their lives. Some Elder people may have missed the retirement mark or may have not properly planned for retirement, so the paycheck may be desperately needed. While the job of a Greeter may not seem like the most important job in the store, there are plenty of advantages to having a Greeter. The next time you see a Greeter, remember that their presence does serve a great purpose in the store.