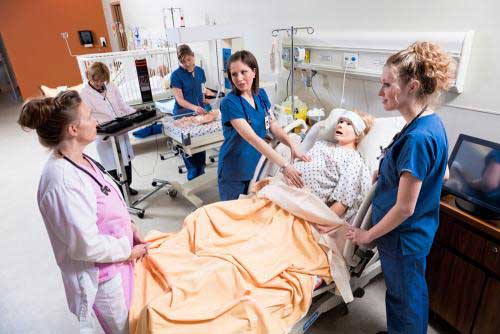 Results of Nursing and the Affordable Health Care Act

As you may know, a recent report has revealed the Texas uninsured rate has fallen by 30% thanks to the limits on premium variation by age put in place by the Affordable Care Act. Because of this regulation, the largest drop in the uninsured was seen in Texans between the ages of 50 and 64, decreasing from 21% to 10%. This infographic created by Norwich University’s Master of Science in Nursing Program outlines the basics of the ACA as well as highlighting the effects it has on the nursing industry as a whole.

This infographic outlines the basics of the ACA as well as highlighting the effects it has on the nursing industry as a whole. Now that there are less Texans who are uninsured, hospitals are expected to save around $5.7 annually in uncompensated care costs that will lead to the creation of 5.6 million new jobs at an annual rate of 3% through the year 2020. The graphic also features the impact of the aging population stating that 22.6% of U.S. residents ages 75 and older made 10 or more visits to their doctor annually, making yet another positive impact on the projection of nursing jobs.

Read Another Confession:   What You Didn't Know About Shakespeare [Infographic]

The Rate of Uninsured Americans by Income

The Impact of ACA on Healthcare Systems and Hospitals

From 1990 to 2008, the national healthcare expenditure relative to GDP grew at the rate of 2% annually. From 2012 to 2013, however, the rate is expected to drop to an average of 1.1%. Since more people now have insurance, hospitals are expected to save around $5.7 annually in uncompensated care costs. This is according to the Department of Health and Human Services.

The ACA has a direct impact on the economy as it is also expected to create 5.6 million new jobs at an annual rate of 3% through to the year 2020. According to the government, 60% of newly insured U.S. residents (through the ACA) visited a doctor, paid for a prescription or went to the hospital during the year.

Read Another Confession:   Are Social Networks Really Needed For My Business? [Infographic]

Where do Registered Nurses Work?

States with the Highest Number of RN’s Per 100,000 People

Projections on Future Hiring Trends in the Nursing Industry

Generally, the employment opportunities for registered nurses are expected to grow in the future. In 2015, there are 2.9 million registered nurses. The number is expected to increase by 525,000 to 3.5 million by 2025. This increase plus the job openings arising from retirement and attrition increases the number of job openings to 1.05 million by 2022.

The Impact of an Aging Population

In 2010, only 13% of the U.S. population was aged 65 years or older. However, this number is expected to increase drastically by 2030 when over 20% of U.S. residents are projected to be 65 years old or older. According to official records, 22.6% of U.S. residents aged over 75 years made more than 10 visits to their doctor annually. On the other hand, 18.3% of residents aged between 65 – 74 years made the same number of visits to the doctor annually. This shows that as the population ages, the demand for healthcare services also increases. It also shows that the ACA has come at the right time as it will ensure the aging population and uninsured Americans get affordable and quality healthcare services.