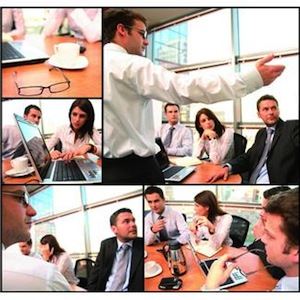 Don’t be ALAP for meeting at the XYZ Conference Center. Get amped for the conference though. That’s because it provides free lunch, tea and dinner – it’s a full service business meeting. But be wary, it can be a bait and switch job. You may not learn anything new – in fact, it can get you Banglored. If it turns out to be a dud, the organizers will likely get into a blamestorming meeting.

Every sentence above contains business jargon that’s music to the corporate ear, but Greek for the Average Joe. Here is a brain dump of silly business meeting jargon that should hopefully keep you amused for the rest of this article:

As Late As Possible. Very fashionable trend at conferences unless the CEO or HR manager is opening the show.

All hyper, pumped with excitement and energy. “I am too amped up to attend the College Football for Peace and Calm Conference.”

Intellectual contribution made by a team member at the meeting. “Don’t bring your ideas to the table. Bring a boomerang-shaped Pizza Margherita instead.”

The top dogs who run the company. “C-level guys should not attend conferences above sea level. Someone get them out of this hill resort.”

When an American job gets outsourced to Bangalore, an Indian city. “There’s just one profession in America that cannot be Banglored – that of a lawyer.”

Browsing the Internet on company time. “Heck, how come there’re no cyberslackers in Facebook? Is Zuckerberg sleeping or what!”

A participant who stays silent at a business meeting and then suddenly, at the end of it, questions a decision, which forces a rethink. The sniper kills the entire meeting time in one line. “Obama did all the talking, Dick did the sniping.”

The feeling that you’ve heard all this gobbledygook before. “I’ve heard words and phrases like synergize, impact, take it to the next level, and a few others so many times, that they now sound like déjà moos.”

Flattery. “Sometimes ear candy can suck because of ear wax.”

Managers who don’t think. “Banks don’t pay attention to their empty suits. They just pay them salaries and bonuses.”

Follow Up. Use it very, very carefully because it can be misunderstood. “Can you F/U with our CEO? He’ll be at the XYZ conference center.”

Chaotic business meeting. “Why are all politicians’ meeting such goat rodeos?”

Very aggressive business strategies. “Too much hardball at work can get you an enlarged prostate.”

A brainstorming meet of creative people where ideas are thrown out rapidly. “I wanted to have an idea shower with Arab leaders but they didn’t understand what it meant and refused.”

These words are music for some, cacophony for others, and Greek to many. Do you have any contributions to make?

Jerry M. Adams is a blogger with EmpowerMint in Bloomington, MN.