Silver Coins In Honor Of Veterans 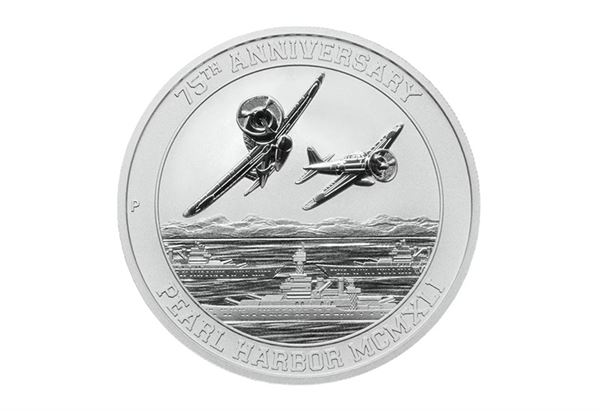 The commemorative 5 oz. Pearl Harbor Silver Coins were presented to three USS Arizona survivors during their five-day stay at Washington D.C. Their trip also included a tour of the Pentagon and a visit to the White House, where they were greeted by President Trump.

The president of U.S. Money Reserve, Philip N. Diehl, expressed the support U.S. Money Reserve has for the men and women that serve their country. Angela Koch, the CEO of the U.S. Money Reserve, further stated that they were honored to meet the survivors of USS Arizona and provide them with a token of remembrance for their bravery. U.S. Money Reserve also wished to be a part of the commemoration of those who bravely lost their lives fighting in Pearl Harbor. They partnered with U.S. Navy Memorial Foundation to help fund a Lone Sailor Statue at Pearl Harbor. It is proposed that the statute should be constructed with metal from the USS Arizona. The plan is to raise the statue on October 13, 2017, the U.S. Navy’s official birthday.

Read Another Confession:   The Marines: Three Moments That Made Me Realize I Wouldn't Re-enlist!

U.S. Money Reserve held a special ceremony in partnership with U.S. Navy Memorial Foundation in order to honor the USS Arizona veterans Donald Stratton, Lauren Bruner, and Ken Potts. In addition to awarding the Silver Coin, U.S. Money Reserve also gave a special acknowledgement to Joe George, who was the man responsible for saving the lives of Stratton and Bruner on the day of the Pearl Harbor Attack.

George was a crewman on a maintenance ship, USS Vestal, during the attack. After USS Arizona suffered great damage, he was given a command to cut the rope that connected the two ships together. Instead, George disobeyed orders and helped stranded men on USS Arizona climb safely off the burning ship. Unfortunately, this act of bravery was unknown to the world for a long time, and George died in 1996 before he could get any proper acknowledgement for it. Joe Ann Taylor, the daughter of Joe George, attended the ceremony to accept the Pearl Harbor Silver Coin on behalf of her father and expressed how much it means to her to get a token of her father’s heroic past. Stratton and Bruner, who feel forever grateful to George for saving their live, have been pushing for a proper recognition of his actions and get George a posthumous award.

U.S. Money Reserve has grown to be one of the world’s largest distributors of government-issued coins that customers trust. Not only has the company received an “AAA” rating by the Business Consumer Alliance, U.S. Money Reserve also exclusively sells coins produced by mints that are trusted and fully backed by the U.S. government.

Read Another Confession:   Step By Step Guide To Protecting Your Small Business From Cyber Crime [Infographic]

Ever since its foundation in 2001, U.S. Money Reserve been true to its original goal – to offer qualified guidance in purchasing precious coins to its customers. Today, over 400,000 satisfied customers have trusted U.S. Money Reserve with managing their precious coin portfolio due to the high level of knowledge in inventory management, coin research, and much more.

Check out the U.S. Money Reserve on LinkedIn and Facebook.