No More Sneezing At The Office 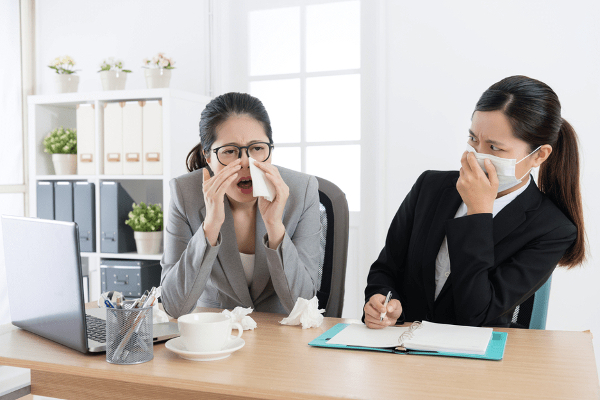 Okay, you might be thinking, “How could anyone stop sneezing? It’s impossible.” True.

Sneezing is a trigger or an automatic reflex or reaction from our body. Irritants such as germs, dust, pollen, pollutants, or any of the number of foreign particles that may enter into our upper respiratory system cause our noses to expel the foreign substances in the form of saliva or snot. It is our body’s reaction to eliminate what does not belong. A simple tickle or itchy feeling inside the nose can cause a instantaneous reaction for expulsion.

We technically didn’t stop sneezing, and the title was slightly misleading, but we what we did do was stop the common courtesy that comes after the sneeze. What do most people say after a sneeze? “God bless you” or “Gesundheit” (good health in German).

When someone sneezes now at the office, we simply go about our business, and there is complete silence to let the person deal with their own bodily functions. There are plenty of tissues around the office and there is a bathroom located just outside the office in the hallway, but considering how large the office is, how many people are in it, there are upwards of over one hundred people throughout the entire day coming in and out of the office, and how many people are actually sneezing, hundreds of sneezes per day, it just no longer made sense to say what we traditionally say after someone sneezes.

When someone is on the other side of the office, sneezes can carry and we do hear it, but on saying the traditional blessings and sayings, might they actually hear us saying it? Probably not, and so it was a complete waste for us to even think about the words and open up our mouths to say it, when we could continue what we are doing without a second thought.

Of course, when it first came about, and I was still new in the office, noticing that no one else said it, I thought everyone was being rude and disrespectful, but after a few people explained it to me, it completely made sense to me that there was no reason for continuing to say it, when we all were being just as respectful by not saying it.

It came about through an agreement everyone had in the office, especially the nighttime workers, whose work is based completely on a metrics system by their performance. For every mistake they make, they are reviewed at the end of the quarter, and it can affect whether they remain employed, receive bonuses, etc. It certainly is a very a stressful fast-paced environment, and the last thing everyone wants to worry about is other people sneezing and losing their concentration.

Not everyone in the office agrees with the policy or participates in it and they do still say the traditional sayings after a sneeze, but many people do actually agree with the verbal agreement: Let someone sneeze in peace. Go about your own business. It might not seem like a lot of time is being taken up by blessing someone after they sneeze, but if you have a few dozen people sneezing throughout the day, with everyone stopping for even a brief moment to say the words, it wastes time.

Think about it this way: When someone sneezes, you may be forced to lose your train of thought and concentration by saying to someone the traditional words after someone sneezes. You probably expect a “thank you” in return, forcing a further interference in the whole transaction of sneezing between one or more people. Concentration, focus, and attention is temporarily lost resulting in lost productivity. Therefore, it only makes sense to to be apart of the “sneezing in peace” verbal agreement.

It might sound like we are all being rude to each other, but when it comes down to it, we are just saving time by continuing to work and be productive. Sneezing is just part of the human system and is never going away. Whoever started the traditional sayings after a sneeze was being very generous, polite, and considerate. However, by not saying it, it does not mean we are not generous, polite, and considerate. To our team, we are being more respectful by not acknowledging it, and letting everyone go about their own business.